“BREAKING NEWS~HUNDREDS OF PEOPLE FAINT AND COLLAPSE AFTER GETTING SINOVAC VACCINE,” the Indonesian-language caption reads. 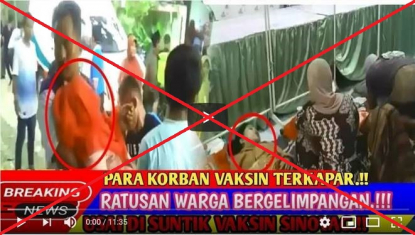 The footage shows people laid on the ground and being carried, while additional clips included in the video show a woman and two men interviewed about Covid-19 vaccines.

The clip has also appeared with a similar claim on Facebook here, here and here; on YouTube here; and on TikTok here, where it has been viewed more than 30,000 times.

A reverse image search found that the part of the video showing people being carried to hospital was taken from a video posted on YouTube on February 11, 2018 titled “Oh God, People Are Rushed to Hospital After Receiving Diphtheria Vaccinations.”

Below are comparisons of the misleading video (L) and the genuine YouTube video (R):

A scene in the original video at the 0:06 mark shows an ambulance with a sticker that says: “DINKES KAB. PAMEKASAN”, which translates as “Pamekasan Regency Health Agency”.

The Indonesian Ministry of Health released a statement on February 13, 2018, titled: “THIS IS THE HEALTH MINISTRY’S EXPLANATION ABOUT MUSLIM BOARDING SCHOOL STUDENTS WHO GOT SICK AFTER ORI” — referring to the outbreak response immunisation programme.

“Following news about students at Muslim boarding schools Al Falah and Mubtadiin Kadur in Pamekasan, East Java, who fell sick after a diphtheria ORI, the East Java Province Health Agency reported that the sickness had nothing to do with diphtheria immunisations,” it said.

“The incident was due to the reactions of the female students after they were given Td vaccinations and their conditions who didn’t have breakfast after immunisations.”

The statement also said the local public clinic vaccinated around 500 students at the two Muslim boarding schools on February 10, 2018.

The sequence of an interview with a woman in a pink hijab matches a January 5, 2021 YouTube video from Indonesian news site Detik.com. “WHY VACCINE? PKS DEMANDS ANSWER FROM HEALTH MINISTER,” the Indonesian-language headline reads.

The woman who gave the interview is Netty Prasetiyani, a lawmaker from the Justice and Development Party (PKS).

The sequence showing two men talking about Covid-19 vaccination was taken from a TV interview from Indonesian broadcaster Kompas TV, published here on YouTube on October 22, 2020. It is titled: “Scientists Talk About Coronavirus Vaccines: Virus May Be More Dangerous.”

In both interviews, which were conducted before the Covid-19 vaccination programme began, neither Netty nor the two scientists discussed people getting sick from Covid-19 vaccines.