Multiple Facebook posts have shared a video that they claim shows an Israeli aircraft downed by Islamic fighters during deadly clashes between Israel and Hamas in May 2021. The claim is false: the video has circulated online since 2020 in unrelated reports about a Syrian military helicopter shot down by rebels in the city of Idlib.

The post's Bengali-language caption translates to English as: "All praise to the Almighty Allah, the Mujahid brothers shot down an Israeli plane."

A mujahid in its broadest sense refers to Muslims who fight on behalf of the faith. 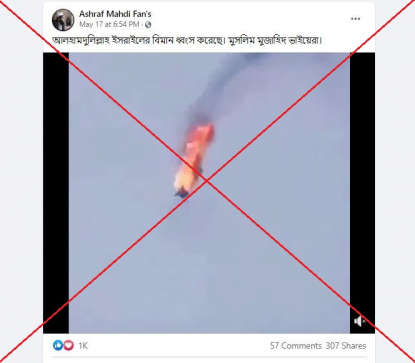 A screenshot of the misleading post taken on May 19, 2021

The post circulated online in mid-May 2021, as fighting between Israel and Hamas intensified.

Hundreds of Palestinians were killed during the 11-day conflict until a ceasefire was agreed on May 21.

An identical video alongside a similar claim was also shared here and here on Facebook.

A reverse image using keyframes from the video found the footage has circulated online since 2020, for example here in an article by Sky News published on February 11, 2020.

For example, this article by Haaretz, which contains the same video, says the footage shows Turkey-backed rebels in Idlib shooting down a Syrian army Mi-17 helicopter.

AFP previously debunked similar footage of the February 2020 Idlib helicopter shooting that was being misrepresented as Myanmar in online posts.