Skip to main content
US President Joe Biden (R) and South Korean President Moon Jae-in participate in a press conference in the East Room of the White House in Washington, DC on May 21, 2021. (AFP / Brendan Smialowski)

A screenshot of a news report has been shared on Facebook alongside a claim it shows South Korean President Moon Jae-in demanded the US provide Covid-19 vaccines for North Korea. But these posts are misleading: the screenshot shows an inaccurate Korean-language translation of a news report about Moon's bilateral meeting with US President Joe Biden in May 2021. The news report in fact states Moon was seeking US support for Covid-19 vaccination in South Korea, not North Korea. 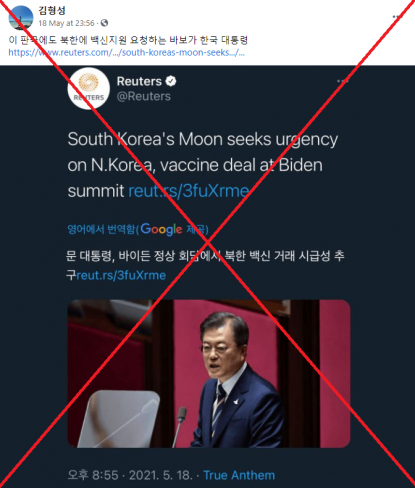 The screenshot appears to show a news report from Reuters news agency. The headline of the report has been translated to Korean as: “President Moon seeks urgency on North Korean vaccine deal at Biden summit.”

The screenshot is captioned: “Even under this situation, foolish Moon is asking the US to provide vaccines for North Korea.”

An identical image with a similar claim has also been shared on Facebook here, here, here and here.

The posts circulated online as Moon visited the US for a bilateral meeting with President Joe Biden on May 21, 2021, AFP reported.

The headline, however, had been inaccurately translated into Korean as: “President Moon seeks urgency on North Korean vaccine deal at Biden summit”.

The Reuters report did not state that Moon sought to secure Covid-19 vaccines for North Korea during his meeting with Biden as claimed in the misleading posts.

The report states in part: “South Korean President Moon Jae-in is hoping to use his first summit with U.S. President Joe Biden this week to revive long-stalled talks with North Korea and urge the White House to embrace the issue with more urgency.

“With the slowing inoculation drive further denting his popularity, Moon promised on Monday to secure a vaccine partnership at the summit by harnessing South Korea's biotech production capacity.”

As of May 25, 2021 there are no credible reports or statements to show that Moon had asked the US to provide North Korea with Covid-19 vaccines.