Skip to main content
This handout photo from Kachin Waves taken on April 29, 2021 and released to AFP on April 30, 2021 shows people taking part in a candle light protest during a demonstration against the military coup in Hpakant township in Myanmar's northern Kachin state. (Photo by Handout / KACHIN WAVES / AFP) / -----EDITORS NOTE --- RESTRICTED TO EDITORIAL USE - MANDATORY CREDIT AFP PHOTO / KACHIN WAVES - NO MARKETING - NO ADVERTISING CAMPAIGNS - DISTRIBUTED AS A SERVICE TO CLIENTS (AFP / Handout)

The misleading post circulated online on the same day the KIA, a leading ethnic rebel army, claimed to have downed a military helicopter during clashes in northern Myanmar, AFP reported. 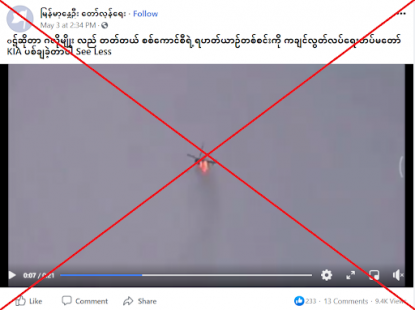 A screenshot of the misleading post taken on May 7, 2021

Myanmar has been in turmoil since the military ousted civilian leader Aung San Suu Kyi and seized power on February 1, 2021, AFP has reported.

The military has launched airstrikes in the country's northern states after ethnic rebel groups came out in support of the anti-coup protest movement.

An identical video was also shared alongside a similar claim here and here. The footage and misleading claim have also been shared on YouTube here and here.

Keyword searches found the video was shared online almost a year before the Myanmar coup in reports about a military aircraft shot down by rebels in Syria.

The footage used in the misleading posts corresponds to a portion of a longer video British newspaper The Telegraph published here on YouTube on February 11, 2020.

The longer video’s caption reads in part: “Videos circulating on social media on Tuesday appeared to show a Syrian air force helicopter being downed by rebels in the area of Nayrab in eastern Idlib.”

Below is a screenshot comparison of the video in the misleading posts (L) and the video posted by The Telegraph (R): 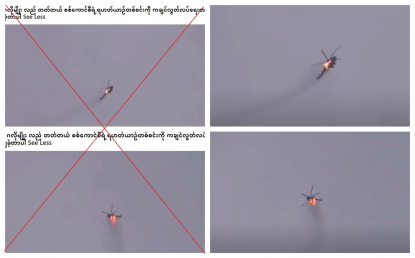 Photos that show the same downed helicopter in Syria also appear in this report by the Associated Press news agency published on the same day. 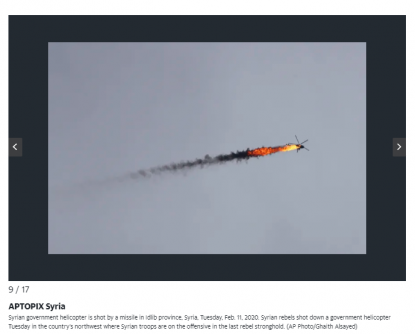 Screenshot taken on May 7, 2021 of photo from the Associated Press

Screenshots of the incident previously circulated in misleading posts that claim they show a helicopter shot down by rebels in Myanmar in March 2021. AFP debunked the posts here.