Two aerial photos of massive crowds have been shared in Facebook posts that purport to show celebrations at the Hindu festival Kumbh Mela in the northern Indian city of Haridwar as the country grapples with a surge in coronavirus cases. However, the posts are misleading. While millions of pilgrims gathered for Kumbh Mela 2021 despite virus fears, the photos were actually taken at the festival in 2019 in Prayagraj, Uttar Pradesh.

The misleading photos are part of this set of five photos posted on Facebook on April 28, 2021. The post has been shared over 600 times.

It purports to show two aerial photos of large crowds gathered at the Kumbh Mela festival in March 2021. Three other images show Covid-19 patients sharing a hospital bed and a mass cremation. 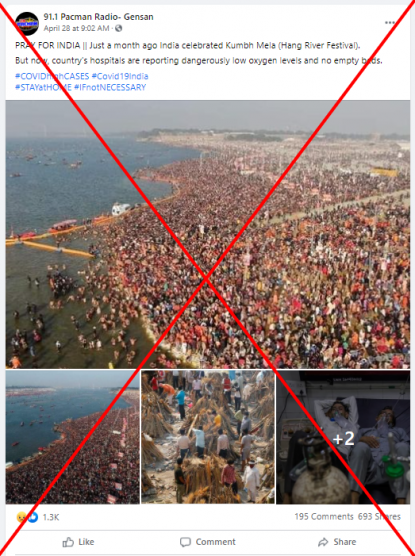 (Screenshot of the misleading images taken on May 5, 2021)

The annual Kumbh Mela festival usually attracts millions of devout Hindus over three months, who take a dip in the Ganges River, which is considered a sacred rite.

The festival was shortened to 30 days this year due to the pandemic, but virus fears did not stop large crowds of pilgrims -- mostly maskless and with no social distancing -- from attending the gathering, with more than three million people taking part on one particular day.

The photos emerged on social media as rising Covid-19 infections overwhelm India’s health system, with the capital Delhi facing an acute shortage of oxygen and mass cremation of Covid-19 victims. The 1.4 billion-strong country is currently the third worst-affected in the world, after the United States and Brazil, AFP reported.

The photos were also shared alongside a similar claim here, here and here on Facebook.

A reverse image search on Google and Yandex followed by keyword searches show the two photos were taken during Kumbh Mela in 2019 in Prayagraj, which was held from January 14 to March 4, 2019.

The first photo was published by AFP here on January 15, 2019, with credit to Uttar Pradesh PR Dept.

The photo caption says it shows Hindu devotees “taking a holy dip at Sangam -- the confluence of the Ganges, Yamuna and mythical Saraswati rivers -- during the auspicious bathing day of Makar Sankranti at the Kumbh Mela in Allahabad.”

Below is a screenshot comparison between the photo in the Facebook post (L) and the AFP image (R) :

The second photo was originally published here by stock photo agency Alamy. It was taken on February 10, 2019.

The photo caption reads: “An [aerial] view of Sangam as Sadhus and devotees take holy dip on the occasion of Basant Panchami festival during Kumbh or Pitcher festival”.

The photo is also published here on Indian magazine Outlook, with a similar description.

Below is a screenshot comparison between the photo in the Facebook post (L) and the 2019 image on Alamy (R) :