Three photos have been shared hundreds of times on Facebook alongside a claim that they show a Myanmar military helicopter that was shot down in March 2021 by the Karen National Union and the Kachin Independence Army, two armed ethic groups in Myanmar. However, the claim is false; the photos in fact show a Syrian military helicopter that was shot down in northern Syria in February 2020.

The photos were published on Facebook here on March 13, 2021. The post has since been shared over 1,800 times. 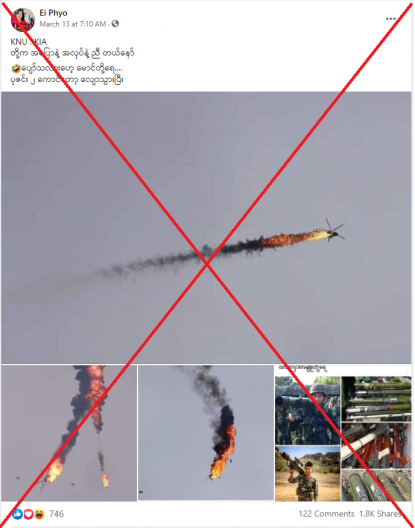 The post’s Burmese-language caption translates in English as: “KIA and KNU have done what they said. Are you happy, guys!! Two dragonflies (helicopters) are down.”

The Kachin Independence Army (KIA) and the Karen National Union (KNU) are non-state ethnic armed organizations who have fought for self-determination against Myanmar's central government for decades.

The post circulated after the armed organizations resumed attacks on Myanmar’s military following the military coup on February 1, 2021, as Myanmar Now, a local media outlet, reported here and here.

The photos were also published alongside similar claims on Facebook here, here, and here.

A Google reverse image search of the first and third images were published by US news agency Associated Press (AP) here on February 11, 2020, nearly a year before Myanmar’s military coup.

The AP article, titled “Rebels shoot down Syrian helicopter as fighting intensifies”, reports that the helicopter was shot down by insurgents near the northern Syrian village of Nairab. 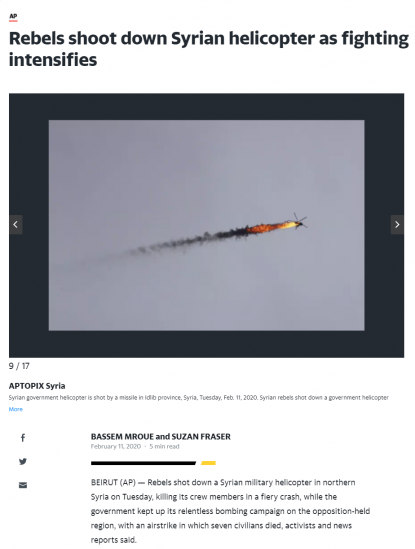 Both of the photos’ captions read: “Syrian government helicopter is shot by a missile in Idlib province, Syria, Tuesday, Feb. 11, 2020. Syrian rebels shot down a government helicopter Tuesday in the country's northwest where Syrian troops are on the offensive in the last rebel stronghold. (AP Photo/Ghaith Alsayed)”.

Below is a screenshot comparison of the photos of the misleading posts (L) and the AP’s photos (R) : 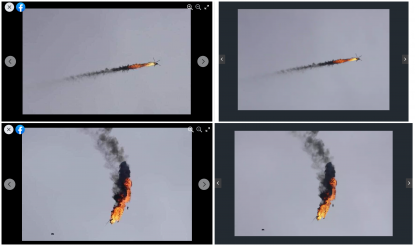 A reverse image search on Bing found the second photo from the misleading posts also circulated in a report about the same downing of a Syrian helicopter in February 2020. It was published by DefPost, a military news website, here on February 11, 2020. 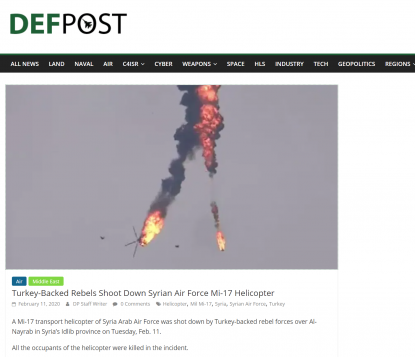 “A Mi-17 transport helicopter of Syria Arab Air Force was shot down by Turkey-backed rebel forces over Al-Nayrab in Syria’s Idlib province on Tuesday, Feb. 11”, the report in part reads.

Below is a screenshot comparison of the photo of the misleading post (L) and the photo in the DefPost’s article (R):

Corresponding footage of the downing of the helicopter was also published by an editor of India Today, an Indian news outlet, on Twitter here on February 12, 2020.

Horrifying video out today of a Syrian Arab Air Force Mi-17 helicopter shot down in the Idlib province of Syria earlier today. pic.twitter.com/KFiJJk10Xu

AFP published a report on the attack on the Syrian helicopter here on February 15, 2020.