Social media posts shared thousands of times claim that a man in Nigeria caught a fish worth $2.6 million, and his village ate the fish instead of cashing in. However, the value of this fish is hugely overestimated. The $2.6 million figure can be traced to the prize money won at an annual fishing competition in the United States, and does not represent its market value. A witness told AFP Fact Check that the fish was sold off in pieces at an affordable price.

“A Nigerian man captured a fish worth $2.6 million. Him and his village people ate it (sic),” reads the caption of the Facebook post shared on March 9, 2021.

The viral posts feature photos of a man in yellow posing next to a large fish. The image is accompanied by the screenshot of a CNBC article with the title, “At a high-stakes tournament, a lucky fisherman reels in $2.6 million in cold hard cash”. Several of the social media posts and blog headlines called the community “ignorant” for eating the fish. 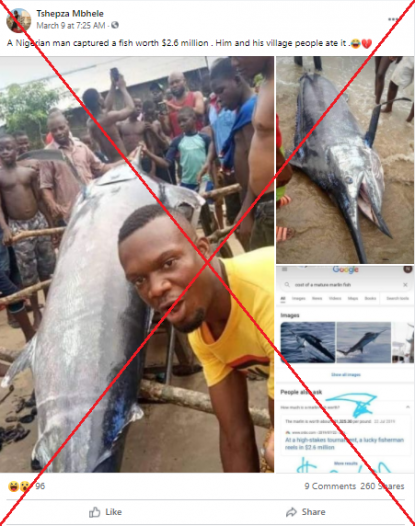 The man in the pictures

Some of the photos in the social media posts feature a man in a yellow t-shirt, which led certain social media users to claim that he is the fisherman who caught the fish. However, this is false. The man, named Zion Godwin, said he was visiting a relative in a fishing settlement in the Andoni Local Government Area of Rivers State, Nigeria when the fish was caught, but he was not the fisherman.

“Actually, when the man brought the fish all the people there could not give the name of the fish. Some said is swordfish while some said is blue marlin (sic),” Godwin wrote to AFP Fact Check via WhatsApp.

It took about eight men to carry the fish from the shore, he said. With assistance from locals and a Google search, they confirmed that it was a blue marlin.

“From my estimate, the fish is up to seven feet by length. There is no equipment there to know the weight,” Godwin said.

Godwin added that the fisherman first tried to find a buyer for the whole fish but was unable to find anyone, and ended up portioning it into six-inch pieces, which were smoked and sold to locals.

“The smallest piece was sold from 2,000 naira ($5.25) while the bigger pieces was further divided to affordable price (sic),” said Godwin.

The value of a blue marlin

The alleged $2.6 million value of the fish was taken from a July 2019 article by CNBC on “the high-stakes world of tournament sports fishing”. However, this price is high above the market value of marlin fish.

The White Marlin Open in Ocean City, Maryland in the US is a week-long fishing competition held every August. It’s been running for nearly five decades.

“Every year the multimillion-dollar jackpot is divided across more than a dozen prizes. In 2018, it included a head-spinning $904,000 payout for the biggest tuna, a $924,000 prize for the largest blue marlin — and the $2.6 million mega-payout for the largest white marlin reeled in,” the CNBC article explains.

The competition organisers confirmed with AFP Fact Check that the Nigerian fisherman could not have raked in millions of dollars for his catch.

“In the United States, there is not a commercial market for blue marlin. This fish would only have value if caught in a tournament that offers prize money for blue marlin,” said Madelyne Rowan, tournament director.

“In order for a blue marlin to have the potential to be worth a million dollars in the White Marlin Open, approximately $20,000 in entry fees would need to be paid,” Rowan added.

Sean Amor, a captain for Hooked on Africa fishing charters in South Africa, agreed with Rowan. Amor has over two decades of fishing experience and told AFP Fact Check that the market value for marlin would never sell for millions of dollars.