An image has been shared in multiple Facebook posts in March 2021 alongside a claim it shows Sara Duterte, daughter of President Rodrigo Duterte, staging a political campaign in the war-torn Philippine city of Marawi. The claim is false: the image has been doctored to digitally insert a campaign banner to an old photo of Marawi.

The Tagalog-language text overlaid on the image translates to English as: "The tarpaulin was given more priority than the rehabilitation of Marawi.” 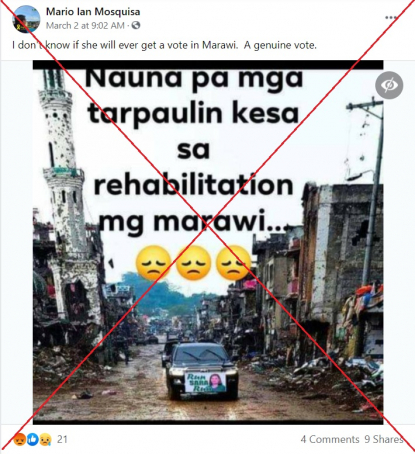 A screenshot of the misleading post, taken on March 15, 2021

The image appears to show a vehicle passing by several shelled buildings, and adorned with a campaign banner that reads: “Run Sara Run.”

“I don't know if she will ever get a vote in Marawi. A genuine vote,” the post’s caption states.

The image spread online as similar campaign banners were seen nationwide urging Sara Duterte, the current mayor of Davao City, to run for president and replace her father in 2022. AFP has previously debunked false claims about these images here.

President Duterte is set to finish his six-year term that year and under Philippine law cannot run for reelection.

Marawi City, located 250 kilometers northwest of Davao, was besieged from in 2017 by armed militants who authorities said wanted to establish a Southeast Asian base for the Islamic State.

Swathes of the city were destroyed in months of house-to-house fighting between state troops and jihadists from the Abu Sayyaf and Maute groups that killed nearly 1,200 people, AFP reported.

Though ultimately dislodged, the attackers were behind some of the worst urban fighting the nation had seen since World War II.

The image was also shared on Facebook here, here, here and here alongside a similar claim.

The claim, however, is false. The image has been doctored to digitally insert a Duterte campaign banner to an old photo of Marawi.

A reverse image search on Google found the original photo was published here by UK photography agency Alamy on October 2, 2017. The original does not show a campaign banner for Duterte.

Below is a screenshot comparison of the doctored photo in the misleading posts (L) and the photo posted by Alamy (R): 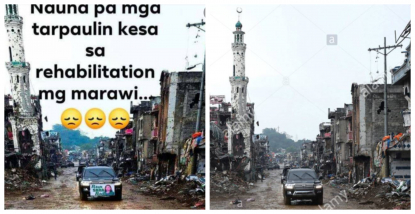 The same photo also appears in this October 9, 2017, report by UK newspaper The Guardian, which shows the vehicle without the inserted “Run Sara Run” campaign banner.