Skip to main content
The President of the Philippines Rodrigo Duterte (1st-R) and his daughter look at pictures of Jewish Holocaust victims at the Hall of Names on September 3, 2018 during his visit to the Yad Vashem Holocaust Memorial museum in Jerusalem commemorating the six million Jews killed by the German Nazis and their collaborators during World War II. (AFP / Gali Tibbon)

An image has been shared hundreds of times in multiple Facebook and YouTube posts in February 2021, purporting to show an edition of The Philippine Star newspaper that reports Sara Duterte, the daughter of Philippine President Rodrigo Duterte, will run for president in 2022. The claim is false: the original photo has been doctored to digitally insert a false headline about the 2022 presidential elections.

The image has been shared almost 300 times since it was posted on Facebook here on February 25, 2021.

The image shows Sara Duterte, who is currently the mayor of Davao City, reading a newspaper with a purported headline that reads: "Sara in 2022".

The Facebook post’s caption reads in part: "Our next President... We will not allow the good deeds of (President Rodrigo Duterte) to go to waste, and only Mayor Sara can continue this genuine change.” 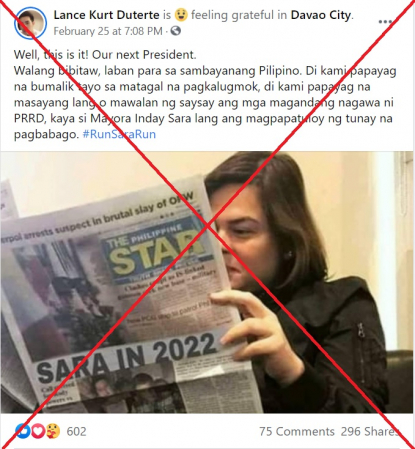 A screenshot of the misleading post, taken on March 1, 2021

The image circulated as banners urging Sara Duterte to run for president in 2022 began being seen throughout the country, as noted by Philippine Daily Inquirer here and Philippine News Agency here.

President Duterte is set to finish his six-year term in 2022 and cannot run for reelection, as per Philippine law.

The image was also shared alongside similar claims on Facebook here, here and here; and on YouTube here.

A reverse image search on TinEye found that the image has been doctored. The original photo was published here by The Philippine Star on February 25, 2018 and shows a headline that reads: “Speaker Sara in 2019?”

The original article — seen on the Star’s website here and here on February 24, 2018 — reports on Sara Duterte’s choice to run for reelection as mayor of Davao City in the 2019 midterm elections or seek a congressionals seat, which would make her eligible to serve as speaker of the House of Representatives. She chose the former and was reelected mayor.

Below is a screenshot comparison of the doctored image (L) and the original photo published by The Philippine Star in 2018 (R):

As of March 1, 2021, Sara Duterte has not made any formal announcement regarding a 2022 presidential bid.