Posts sharing a letter purportedly sent by the European Union (EU) to Uganda's opposition leader Bobi Wine claiming to warn him against swearing himself in as president have been shared more than a dozen times on Facebook and Twitter. The claim is false; the document, which does not appear on any of the EU's official online channels, was rejected as a fake by officials in the organisation’s Ugandan office. Wine had previousy dismissed rumours that he was planning an inauguration ceremony in parallel to the official event.

“European Union set to block NUP' Kyagulanyi plans of swearing self as president of Uganda (sic),” reads a post on a Facebook page called "Tooro news".

According to the missive, the EU recognises Uganda's president Yoweri Museveni as the country’s duly elected leader and calls on former pop star Robert Kyagulanyi, also known as Bobi Wine, to refrain from swearing himself in following his failed presidential challenge in January.

A Ugandan publication called The New Vision used the purported letter in a news report, which has since been deleted.

AFP Fact Check could not find the document on any of the EU’s official sites and social media channels. Instead, we found a Facebook post published by the EU’s Ugandan office warning the public to be wary of “disinformation”.

“Please disregard a fake letter circulating online allegedly written to National Unity Platform President Hon. Robert Ssentamu Kyagulanyi Bobi Wine from the European Union Ambassador to Uganda H.E Attilio Pacifici. This is the latest of many attempts at disinformation in Uganda. Say no to #disinformation!!!,” the EU’s post reads.

Uganda’s general elections were marred by violence, with opposition candidates forcibly prevented from campaigning and dozens of protesters killed by security forces. The EU and the United States called for investigations into the abuses and violence that overshadowed the polls.

As a result, on April 16, 2021, the US announced visa restrictions “on those believed to be responsible for, or complicit in, undermining the democratic process in Uganda”.

Speculation began to mount days before Museveni's May 12, 2021, inauguration that Wine would conduct a parallel swearing-in ceremony, installing himself as president.

AFP Fact Check debunked a claim based on the rumour, to which Wine had responded by saying: “I am not planning, or my party, to swear in as president of Uganda but Ugandans have taken oath in their hearts that I was the rightly elected president of Uganda whose victory was stolen by Museveni and the victory will one day come back to us”.

On May 12, 2021, while Museveni was being sworn in for his sixth term as president in a ceremony attended by several African heads of state and other foreign dignitaries, Wine said police and soldiers had “besieged” his home on the outskirts of Kampala and prevented him from leaving. 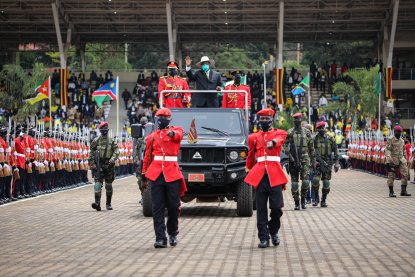 Ugandan President Yoweri Museveni (C on vehicle) gestures while standing on a car during the inauguration ceremony for his sixth term at Kololo Ceremonial Grounds in Kampala, Uganda, on May 12, 2021. (AFP / Badru Katumba)