Multiple social media posts share two photos alongside a claim that they show a mosque built “eight centuries” ago and “discovered after a sandstorm” in an Algerian desert. The claim is false: the mosque was built in 1935 in Algeria and the photos do not show its condition after it was uncovered by a sandstorm.

The pictures were posted on April 2, 2021, on Twitter here, where they have been retweeted more than 400 times. 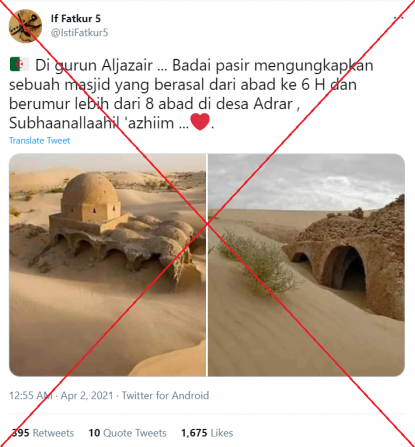 The Indonesian-language tweet translates to English as: “In the desert of Algeria ... Sandstorms reveal a mosque dating from the 6th century AH and more than eight centuries old in the village of Adrar, Glory be to Allah …”

The pictures have also appeared on Facebook alongside a similar claim here, here, here and here.

A reverse image search on TinEye followed by subsequent keyword searches on Google found the first picture was posted on this Facebook page called “The History of Berbers” on May 10, 2015, credited to American photographer George Steinmetz.

The post’s caption reads: “Abandoned village near Lizereg, NE of El Oued, which shows the now disused practice of building homes with a series of domes and walls made with sand roses, or salt encrusted sand crystals that are mortared together. This style of building has disappeared over the past 25 years as the region adopted concrete and rebar as building materials, but nearby El Oued is still known by the name given over a hundred years ago by traveler Isabelle Eberhardt, who called it ‘the city of a thousand domes’.”

Berber is one of the descendants of the pre-Arab inhabitants of North Africa.

El Oued is the name of a city and a province in the northeast part of Algeria.

“I don’t know if it was a mosque or not, as virtually all of the old buildings in that area were made with the same style of architecture,” he said.

Below is screenshot comparison between the first picture in the misleading post (L) and the genuine photo (R):

The 2015 post did not mention a sandstorm or the building’s age.

A reverse image on TinEye found the second photo was taken by French photographer Cyril Preiss and posted here on image-hosting platform PBase, where it is dated October 30, 2004.

The right-bottom corner of the photo also bears a watermark of Preiss’s name.

Screenshot of the second photo on PBase

Below is the screenshot comparison between the second picture in the misleading post (L) and the genuine photo (R):

Preiss confirmed that he took the picture. “The photo was taken around an abandoned village near El Oued in Algeria in late 2004,” he told AFP on May 12, 2021.

He said he did not know the name of the village or what the building was, but it was clearly not an old mosque uncovered by a sandstorm.

A search on Facebook found some images showing a building similar to the one seen in the two photos. The photos were published by the account of Elmardjan El Oued association.

Salah Tamer, secretary general of the Elmardjan El Oued association, confirmed that the two pictures show a disused mosque in an abandoned village.

“It’s a mosque built in 1935. It has been renovated twice in the past: in 1962 and again in June 2020,” he told AFP.  “It was renovated by the Elmardjan El Oued association with the help of volunteers.”

He said the mosque was no longer used, but that “visitors and tourists sometimes come to pray there”.

Below is a photo of the mosque that the association shared with AFP: 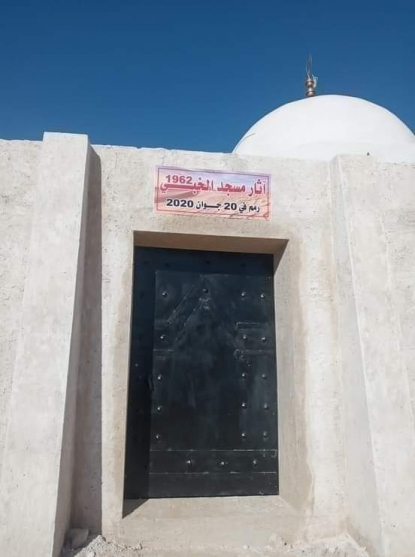 The mosque lies in the abandoned village of Lakhbi, whose inhabitants left in 1975 to move to the neighbouring village of Lizereg in Trifaoui, Tamer said.

“When the villagers moved away, the mosque was left to face the elements, and was damaged by wind and rain,” he added.

Below is a photograph, sent by Tamer, showing the mosque after the latest renovation: 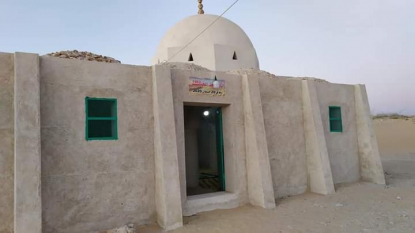 The story behind the mosque and its renovation was covered here in an Arabic-language news report by El Bilat TV from Algeria.