Skip to main content
Supporters of US President Donald Trump inside the US Capitol on January 6, 2021 (AFP / Roberto Schmidt)

Social media posts and online articles claim special forces took Speaker of the House Nancy Pelosi’s laptop during the storming of the US Capitol building on January 6, 2021. But officials from military commands responsible for elite American troops told AFP they have no information on such an incident, and the top Democrat’s office said that while a laptop was stolen, it was from a conference room and was only used for presentations.

“On Wednesday, they took Pelosi’s laptop… she's frantic. There were some people in there that were special forces mixed with Antifa, and they took her laptop, and they have that data,” retired Air Force lieutenant general Thomas McInerney said in a video included in this January 9 Facebook post. 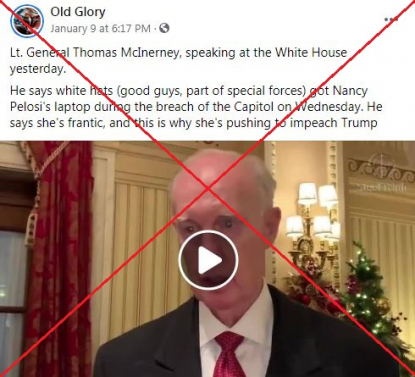 The claim also appeared on Facebook here and here, on Twitter here, on YouTube here, and in online articles -- one of them from InfoWars, which was founded by conspiracy theorist Alex Jones -- here and here.

The president’s supporters disrupted the session of Congress in which lawmakers met to certify Joe Biden’s victory in the 2020 election. For months, Trump had repeatedly and falsely claimed that the vote was plagued by widespread fraud. He made those claims again in a speech in Washington shortly before the breach of the Capitol.

Lawmakers later reconvened and voted to formally certify Biden’s win, though several members of Congress continued to object to the decision. Facing mounting political pressure, Trump acknowledged that his presidency was ending and promised a smooth transition to the Democratic administration that will be led by Biden.

AFP Fact Check has previously debunked claims that Antifa -- a structureless movement that says it is dedicated to fighting fascism online and in public -- stormed the Capitol.

“There are no reports or information about anyone who is currently or was previously assigned to any USSOCOM organizations having anything to do with the theft of Speaker Pelosi’s laptop or anything else that may be missing from the Capitol,” a spokesman for the US Special Operations Command told AFP by email on January 12, 2021.

A spokesman for the US Army Special Operations Command likewise said he had no information about the alleged incident.

“As of this time, I have no knowledge of any of that,” he said by phone on January 11.

Asked about the laptop claim, Drew Hammill, Pelosi’s deputy chief of staff, referred AFP to a January 8 tweet in which he wrote: “A laptop from a conference room was stolen. It was a laptop that was only used for presentations.”

Some posts claimed that Pelosi’s seized laptop was the source of a letter from the speaker to Portland, Oregon Mayor Ted Wheeler suggesting how to respond to “riots” in the northwestern US city. But AFP Fact Check reported here that the letter is fake.

After a long career in the Air Force, McInerney became a military analyst. But he was sharply criticized for saying on Fox Business Network in 2018 that torture “worked” on John McCain, the late senator for Arizona who was subjected to brutal treatment while held prisoner during the Vietnam War.

McInerney was also frequently cited as the source in posts falsely saying that five US soldiers were killed during a raid in Germany targeting a CIA server farm. That claim was debunked by AFP Fact Check here.

Video of McInerney’s remarks shows that he attempted to link the alleged loss of the laptop to the push by Pelosi -- a regular target of false claims -- to remove Trump from office.

“So you’d say, ‘Well look, you only got 12 days or whatever it is ‘till the 20th, why worry about it, just let him go out.’ No, they are terrified, because they have that data,” McInerney said.

In reality, efforts to remove Trump are tied to his role in stoking the anger that led to deadly unrest at the Capitol.

The House of Representatives was expected to vote late on January 12 on a bid to get Vice President Mike Pence and the cabinet to invoke the US Constitution’s 25th Amendment.

Doing so would install Pence as acting president, but Trump is unlikely to be removed this way.

Democrats will follow up the 25th Amendment vote with impeachment proceedings in the House the following day. The single charge of “incitement of insurrection” is all but certain to get majority support.