Screenshots of two news reports have been shared repeatedly in multiple Facebook posts that claim they show a woman receiving a Covid-19 vaccine in the UK and South Africa. The posts suggest the image has been staged by the media to mislead the public about the coronavirus pandemic. The claim is false: the British woman pictured in the posts received a Covid-19 vaccine in England in December 2020, according to a Getty Images photo. The other screenshot in the posts shows a satirical article from a South African newspaper about a woman receiving the vaccine in the South African town of Ventersdorp that was “not meant to be interpreted literally", its editor-in-chief told AFP.

"Susan Smit (78) from Ventersdorp resignedly received the vaccine that puts her under the direct control of Bill Gates in her right upper arm. "Oh, let's hope he's less dead than Uncle Japie," she told Rapport with an anxious laugh," the caption reads in Afrikaans. 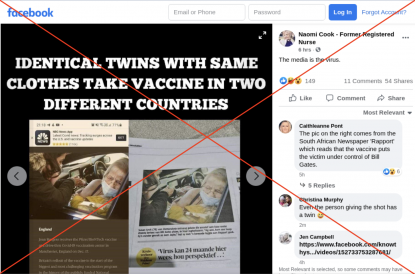 The Facebook post's caption reads: “The media is the virus.”

Misinformation about vaccines has intensified on social media after Britain became the first Western country to start mass coronavirus vaccinations on December 8, 2020. Some widely-shared posts have falsely accused politicians of pretending to get the shot, while others wrongly claim two participants in a vaccine trial died from the jab.

Similar posts featuring the same image composite of a woman being vaccinated were shared on Facebook here, here and here alongside a similar claim.

A Google search found the image in the post is a photo taken by Getty Images photographer Christopher Furlong. It shows a British woman named Joan Burgess receiving the Pfizer/BioNTech vaccine at a drive-through Covid-19 vaccination centre on December 17, 2020 in Manchester, England, according to the photo caption. 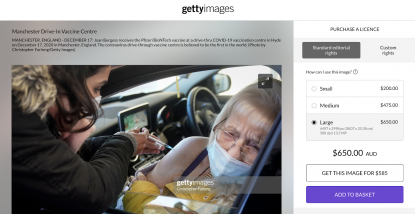 A screenshot of the Getty Images photo.

A Google search for “Susan Smit” found this clarification posted on Facebook by Rapport, a South African newspaper. It states the caption about the image of Joan Burgess was posted in a satirical section of the newspaper.

“The information in the caption was - as is the case every week - imaginary and not meant to be interpreted literally,” the statement reads in Afrikaans. “The same photo was the front page photo of the newspaper last week (December 20) and was accompanied by the correct information and names. Rapport accepts that the satirical caption offended some readers and apologises for that.”

The clarification also appears on

rapport-rh-hoofkoerantjhb-rhhoo002-2.pdf page two of the Rapport newspaper published on January 3, 2021. Below is a screenshot of the clarification: 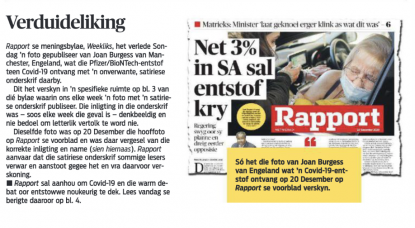 As noted by the newspaper, the image appears with the correct caption and information

rapport-rc-hoofkoerantcpt-1.pdf on the front page of the December 20, 2020 edition. 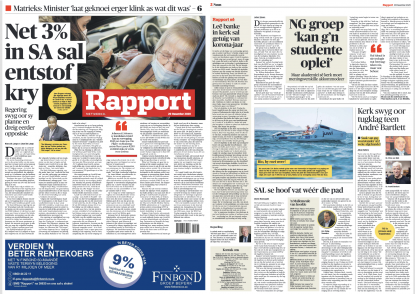 Screenshot of the front page of the December 20, 2020 edition of Rapport.

The caption credits Getty Images for the photo and states it shows Joan Burgess receiving the Covid-19 vaccine in Manchester, England. 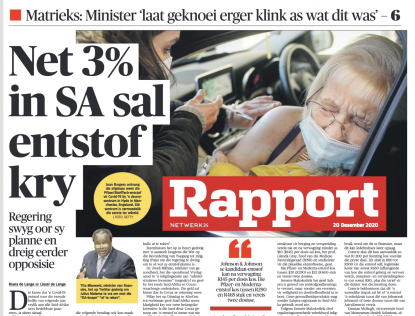 Screenshot of the image and caption on the front page of the December 20, 2020 edition of Rapport.

In an email to AFP on January 12, 2021, Rapport editor-in-chief Waldimar Pelser said the image was published with a satirical caption in the paper's opinion section, Rapport Weekliks (Weekly).

The satirical caption "poked fun at anti-vaxxers by suggesting that the imagined South African woman willingly submitted herself through the jab to control by [Bill] Gates," Pelser said.

"The latter part of the caption even suggested she hopes the vaccine has more 'kick' than her late husband. It was very clearly a joke, not least because the picture and caption were published (27 December) in a space in Weekliks which is only and always used for satire."