A video has been shared widely in Kenya with claims that it shows a man killing his four-month-old baby after throwing the child to the ground during a domestic dispute with his wife. While a similar incident did occur in Kenya, the video shows a scene from a new Tanzanian movie. Some Kenyan media have since removed the video from their online reports.

A Facebook post on January 26, 2022, includes a screenshot from a video showing a man beating up a woman in a living room, and then flinging a “baby” out of the frame.

“In a video that has gone viral, the suspect is seen physically assaulting his wife Mary Muthoni, using a belt while their baby is crying on the floor,” the caption reads.

Kenya’s Nation newspaper reported on the arrest of a 23-year-old man for allegedly killing his four-month-old baby on January 26, 2022.

The man, named as Mark Njuguna, is alleged to have bashed the child’s head on the floor following a quarrel with his wife about the infant’s paternity. The baby died instantly.

“The statement from the suspect’s wife indicates Mr Njuguna forced her to sit on the floor before he grabbed the baby and hit his forehead on the concrete floor,” regional police commander Peter Muchemi told the newspaper.

She then ran to her father-in-law’s house and reported the incident.

When the Nation wrote the story, they wrongly assumed the video shared on social media was from the crime scene.

The paper later corrected its report in an editor’s note saying: “An earlier version of this story linked the arrest in Murang'a to a viral video doing rounds on social media. We have since learnt that the two are unrelated. We apologise for the mix-up.” 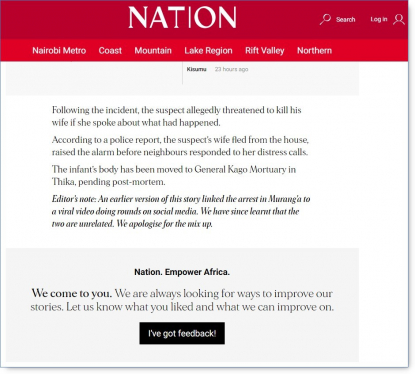 Kenya’s Capital News also initially published the story with a screenshot from the video but has since changed the image to a generic picture of police tape.

However, the image in the link still shows the incorrect screenshot when shared on WhatsApp. 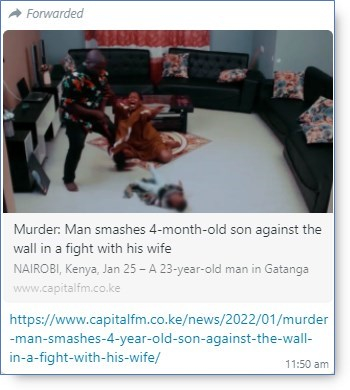 A screenshot of the Capital FM article link on WhatsApp, taken on January 27, 2022

Scene from a movie

AFP Fact Check found that the video actually features a scene from an upcoming Tanzanian film by Sanau Swahili Movies.

Called Sitamani Kuolewa Tena -- which translates to “I Don't Wish to get Married Again” – the movie was “produced for the sole purpose of educating society against domestic violence”, reads the Swahili caption below the YouTube.

The trailer also makes clear that it’s “a fictional story not related to any real event”.

The misleading version of the story has gained a lot of traction and is being replicated by blogs in other countries, including for Ghanaian and South African audiences.

Kenya has seen an increase in reported cases of domestic violence against women and girls during restrictions introduced to curb the Covid-19 pandemic, although gender-based violence was prevalent before.

The issue of domestic abuse was placed in the spotlight in October 2021 when two Kenyan athletes, Cynthia Makokha and Agnes Tirop were found dead in the same week.