Skip to main content
A woman jogs in front of the state capitol building in Madison, Wisconsin, on January 17, 2021 ( AFP / Kamil Krzaczynski)

Wisconsin did not vote to withdraw its US presidential electors

Online articles and social media posts claim Wisconsin legislators voted to withdraw the state's 10 electors for President Joe Biden on the grounds that the 2020 election was fraudulent. This is false; a lawmaker attempted to introduce such a motion but no vote was held on the measure, and experts say there is no legal basis for decertifying US elections.

"Wisconsin Assembly Votes to Withdraw Its 10 Electors for Joe Biden in 2020 Election" says a screenshot of an article headline shared in a January 25, 2022 Facebook post.

The headline of the article -- which was published by The Gateway Pundit, a website that has repeatedly made inaccurate claims that AFP Fact Check has debunked -- has since been updated.

The article claims the Badger State's assembly "voted unanimously" to move forward a resolution that would withdraw the state's electors on grounds that the 2020 general election process was fraudulent. 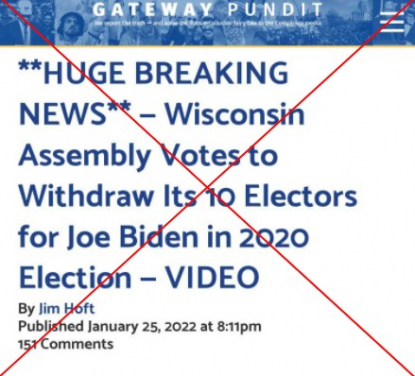 Arizona Republican Party Chair Kelli Ward tweeted the article, suggesting her state "should have been first," while similar articles and social media posts also claimed that Wisconsin voted to withdraw its electors.

The claims follows other inaccurate allegations of voter fraud in Wisconsin, one of several states in which Republicans submitted illegitimate Electoral College results following Donald Trump's loss in the 2020 general election, an issue that Congress is investigating.

But no vote was taken on a measure to withdraw the state's electors.

Ramthun introduced it as a privileged resolution, which "may be offered under any order of business by a member who has the floor." Such resolutions can be discussed immediately, "unless referred by the presiding officer to a standing committee or to the calendar."

AFP reviewed footage of the session, which shows Speaker Robin Vos told the chamber that Ramthun's "resolution has been referred to the assembly Committee on Rules."

The committee did not respond to a request for comment by the time of publication, but the resolution's history also reflects this referral.

Vos then moved on, asking for a vote on the unrelated Assembly Bill 743. Ramthun sought to suspend the rules to withdraw the resolution, an action he was told was an improper motion.

Bill 743 -- a piece of legislation about information disclosure for online marketplaces -- was the measure that passed in the subsequent vote, not Ramthun's resolution.

The resolution is part of a broader movement to decertify the 2020 election, based on unfounded and repeatedly debunked allegations that fraud affected the results.

Constitutional experts told AFP for a previous fact-check that while the Electoral Count Act provides for certification of the vote for president, it has no provision for decertification.

"There is no process under the US Constitution or any other US law to 'decertify' a presidential election," Rebecca Green, a professor of law and co-director of William & Mary College's Election Law Program.