Skip to main content
Philippine Vice President Leni Robredo speaks during a press conference to announce she will run in the 2022 presidential race, in Quezon City on October 7, 2021. ( AFP / Maria Tan)

A video has been viewed hundreds of thousands of times in social media posts that claim it shows Philippine Vice President Leni Robredo "admitting she cannot defeat rival Ferdinand Marcos Jr no matter what she tries" ahead of the 2022 presidential election. The posts are misleading. In the original footage, Robredo said that she could not match Marcos Jr's resources but was hopeful she could defeat him by enlisting more people to volunteer for her campaign.

"VP Leni slipped - she admitted that no matter what her team tries, they cannot defeat BBM", reads a Tagalog-language Facebook post shared on January 12.

Leni Robredo and Ferdinand "Bongbong" Marcos Jr -- commonly referred to by his initials "BBM" -- are rivals for the top job in the 2022 Philippine presidential elections in May.

In the video, which has been viewed more than 200,000 times, a narrator says in Tagalog: "This is the viral video of Vice President Leni Robredo that sparked various reactions after she admitted she will not win against Bongbong Marcos no matter what her camp does".

"But we have something they don't -- the perseverance of volunteers." 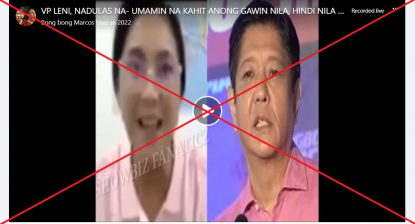 A nationwide survey suggested Marcos Jr -- the son and namesake of the Philippines' former dictator -- had a strong lead over Robredo and other candidates.

"Good that you know the truth that you can't defeat BBM. What you said is correct, Leni," one commented.

"It's good that you've admitted you cannot defeat them. I think you should just join them and help each other make the Philippines better," another wrote.

In reality, the footage has been misleadingly edited.

The clip was taken from the 1:09:35 mark of a longer video broadcast on Facebook on January 11.

Below is a screenshot comparison of identical frames from the video in the misleading posts (left) and the original Facebook video (right). 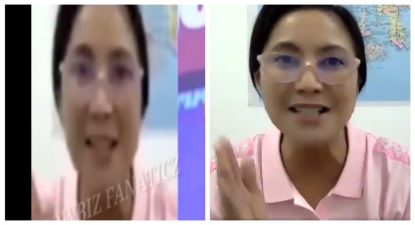 A review of the video shows Robredo's subsequent explanation was omitted in the video in the misleading posts.

"But we have something they don’t -- the perseverance of volunteers.

"Because of the perseverance of volunteers, we can do this. This January, we have met with different groups and have decided to do ground campaigns."

A transcript of Robredo's remarks distributed to the media by her office includes the same utterance.

Local media outlets ABS-CBN and Manila Bulletin reported that Robredo said she believed she could beat Marcos Jr despite her lack of campaign resources.