Multiple Facebook posts purport to show a "diamond-encrusted airplane" from the UAE-based airline Emirates. However, the posts are misleading; the images were in fact digitally created by Pakistani artist Sara Shakeel.

A collage of three images of an aircraft sitting on a runway were shared in this post, published on Facebook on December 10, 2021.

The English- and Sinhala-language caption to the post reads: "Emirates Diamond-Encrusted Airplane. What a beauty". 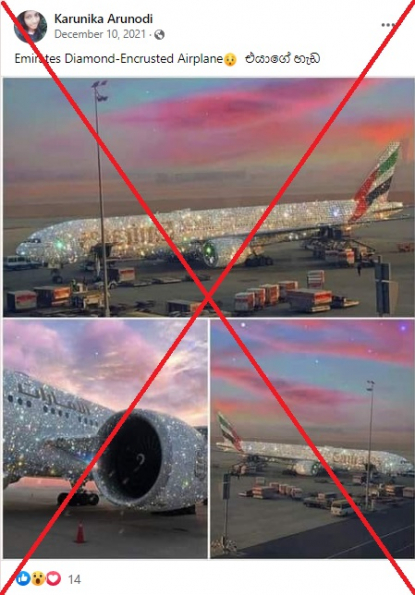 The first picture is a cropped and mirrored image of the third picture.

The images do not show a real diamond-encrusted airplane — they are digitally created artworks.

The caption to post states the image was created by Sara Shakeel, a London-based Pakistani digital and visual artist.

A closer look at her Instagram account found she posted the original images here and here, on December 4 and December 9, 2018, respectively.

Below is a screenshot comparison of the images in the misleading post (top) and Shakeel's pictures (bottom): 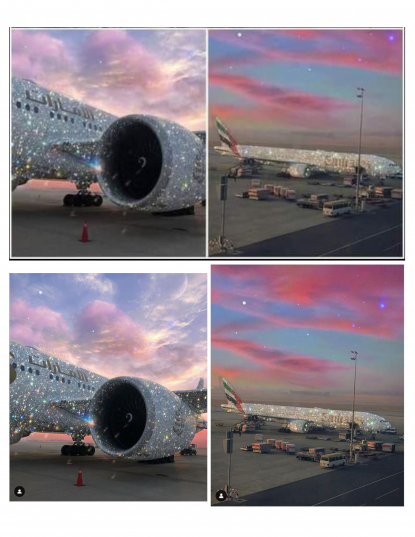 Emirates told Dubai-based newspaper Gulf News in this article, published on December 5, 2018, that none of its airplanes were covered in bling.

"We just posted an art piece made by crystal artist Sara Shakeel," an Emirates spokesperson was quoted as saying. "I can confirm it’s not [real]."

In an interview published by Architectural Digest Middle East on January 2, 2020, Shakeel explained that she created the Emirates artwork spontaneously while she was travelling.

"I was flying to Milan because I was nominated for an award (which I won) and my excitement level was through the roof. Before boarding, I saw my plane and decided to take a picture and quickly cover it up in crystals. I posted the picture before flying and went to sleep.

"When I woke up I saw Emirates' official page had contacted me and wanted to share the artwork. It literally blew up the Internet."

She also told the magazine that her artworks are "nothing more than an illusion".

In October and December 2021, Shakeel also wrote on Instagram that the "Emirates plane is not real" and it's "just a piece of digital art".