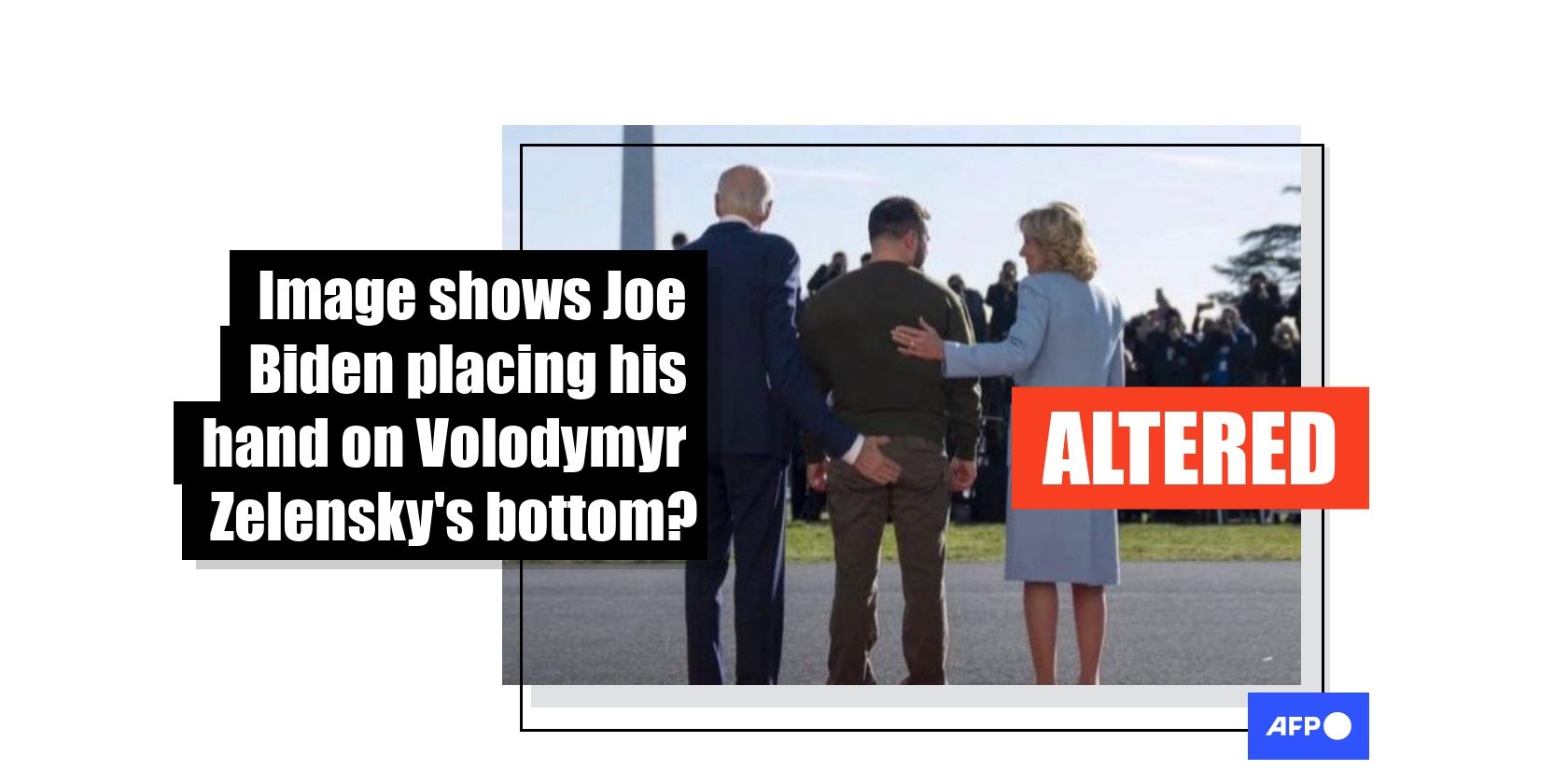 On the heels of Volodymyr Zelensky's December 21, 2022 trip to Washington, social media users are claiming an image shows US President Joe Biden placing his hand on the Ukrainian leader's buttocks. But the picture has been digitally manipulated; the original photo and other shots from the visit show Biden's hand on Zelensky's back, and a White House spokesperson confirmed the version circulating online is "doctored."

"I guess Biden thinks that $44 billion buys him exclusive groping rights," says one of several tweets that shared the image, referencing emergency assistance earmarked for Ukraine in a $1.7 trillion spending bill that the US Senate passed December 22.

The image spread widely on platforms such as Twitter, Telegram and Instagram in multiple languages and countries, including the UK, Canada, Australia and India.

Another version posted to Twitter, which appears to show both Biden and First Lady Jill Biden grabbing Zelensky's bottom, received more than 1,500 upvotes on the far-right forum "The Donald." 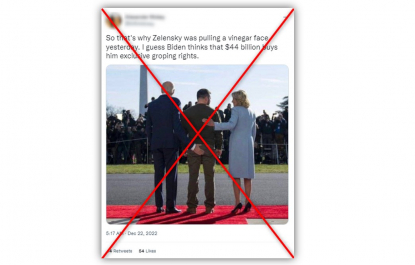 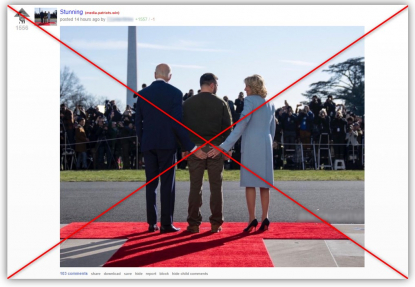 The visit to the White House was Zelensky's first since Russia invaded Ukraine in February 2022, launching a months-long offensive that has disrupted the global economy and left thousands dead. Zelensky addressed US lawmakers, and Biden pledged that the war-torn nation would "never stand alone" against Russia's aggression.

But the photo of the two leaders has been digitally altered.

An AFP review of photos, videos and social media posts from Zelensky's trip shows that Jill Biden posted the original picture to Facebook and Twitter on December 21. It shows the US president and his wife each with a hand on Zelensky's back as the three of them look toward the Washington Monument.

President Zelenskyy, we hope you take our love and support back to Olena and your children, and all the families of Ukraine. pic.twitter.com/z1uqAAl8B8

White House National Security Council spokesman Sean Savett confirmed in an email to AFP that the photo posted by Jill Biden is the original -- and that the one circulating elsewhere online is "a photoshopped, doctored image."

A close look at the altered version shows the tip of Joe Biden's thumb -- which is resting beneath his wife's pinkie finger in the original -- has been chopped slightly in the editing process. 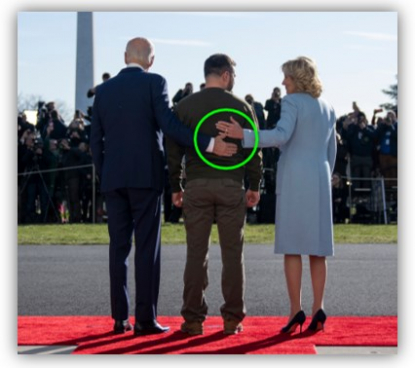 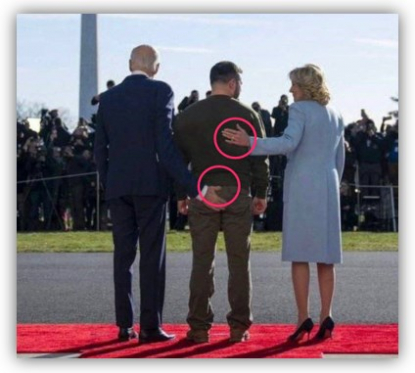 Illustration using a screenshot taken December 23, 2022 of a manipulated image on Twitter

AFP footage and pictures from the event show the US president never groped Zelensky. 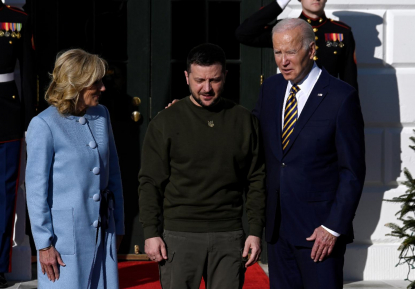 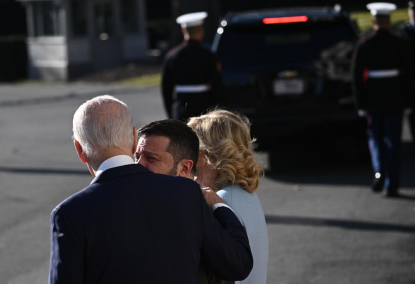 The photos of the Bidens are not the only manipulated visuals to spread online after Zelensky's visit to Washington.

A video shared December 22 on Twitter purports to show Joe Biden sniffing Zelensky during the Ukrainian leader's speech to Congress. 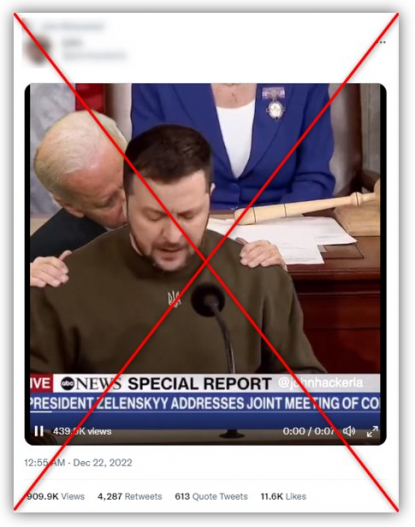 But the clip has been digitally altered using a 2015 photo of Biden that is often used in doctored visuals.

The original image, taken in February 2015 by the Associated Press as Ash Carter was sworn into office, shows Biden placing his hands on the shoulders of the former defense secretary's wife. Stephanie Carter has said it was a gesture of support.

Footage of Zelensky's address shows no such move.

Biden faced scrutiny during the 2020 presidential campaign for his affectionate physical style, including public statements from women who said his touching at past events made them uncomfortable. Among the criticism was one accusation of sexual assault, which Biden denied.

The posts about Zelensky build on a baseless narrative -- fueled in some instances by former president Donald Trump and supporters of the QAnon conspiracy theory -- that Biden regularly abuses women and children.

All articles
Ukraine-Russia conflict US POLITICS