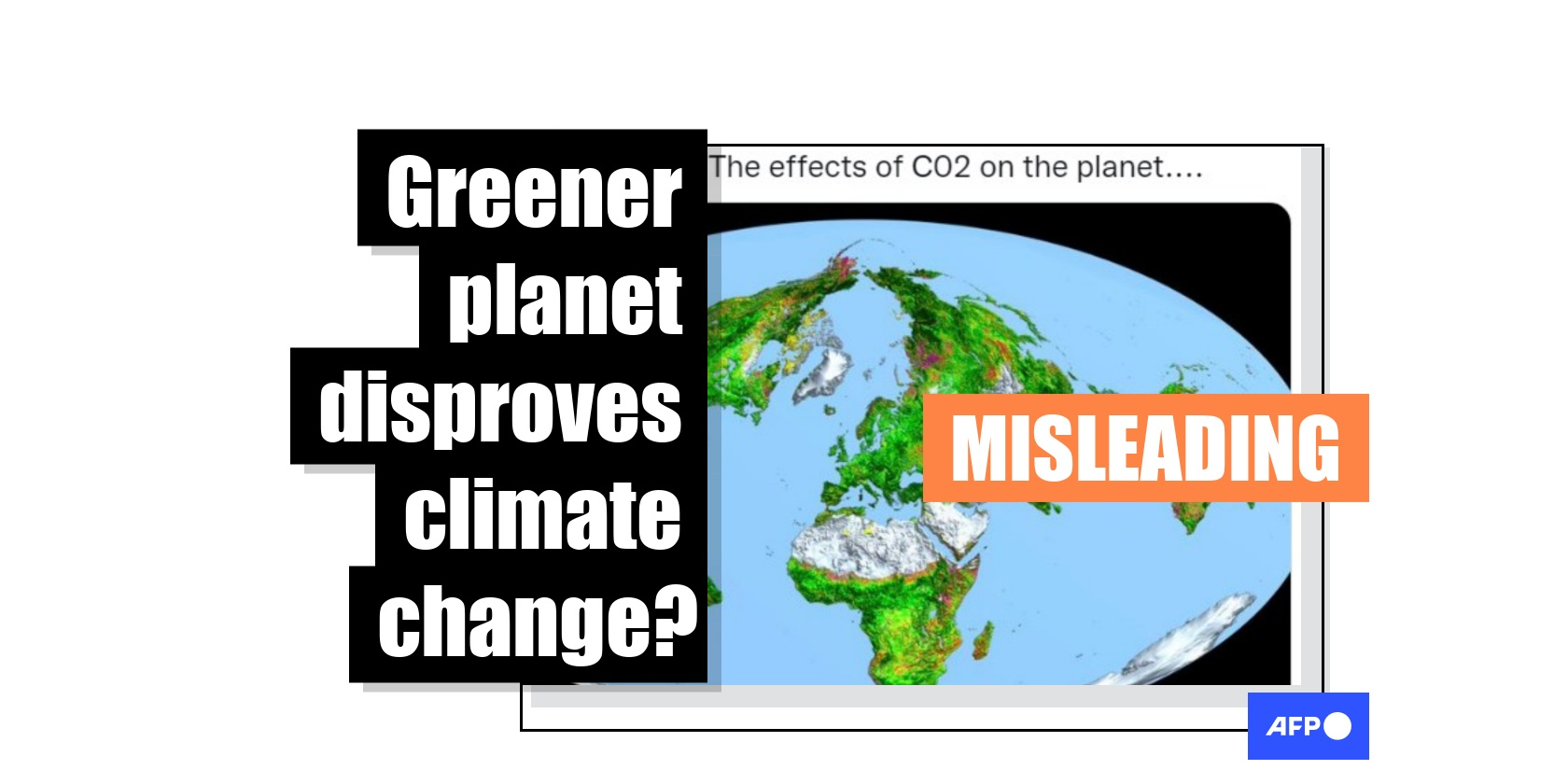 Carbon dioxide (CO2) contributes to global warming, but social media posts claim an image showing an increase in vegetation over time suggests the greenhouse gas is actually beneficial to the planet. This is misleading; the map is more than five years old, research shows the "greening" trend may end and experts say rising temperatures can harm plants.

"Look closely. The effects of CO2 on the planet....," says a November 27, 2022 tweet from former University of Toronto professor Jordan Peterson that has tens of thousands of interactions. 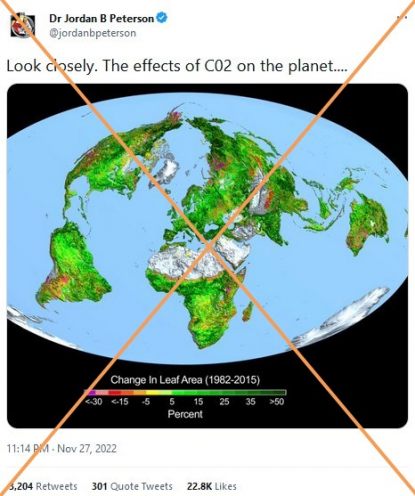 The posts spread as scientists warned at the United Nations COP27 climate summit in Egypt that global CO2 emissions, one of the main drivers of climate change, reached record highs in 2022.

Rising CO2 is associated with higher temperatures, and research suggests it could increase the risk of extreme weather events. Most scientists agree recent changes in the climate are due to greenhouse gas emissions linked to human activity.

Increased CO2 can also enhance plant growth, but claiming it is good for the planet is misleading.

A reverse image search reveals the map shared online comes from a 2016 study published in Nature Climate Change by an international team of scientists. They used satellite data to see how the leaf area index (places on Earth exhibiting green leaves) evolved from 1982 to 2015.

"As much as half of all vegetated land is greener today, and remarkably, only 4 percent of land has become browner," said Pep Canadell and Yingping Wang in an April 25, 2016 article from The Conversation about the study's findings.

The co-authors said Earth is greener mainly because increased CO2 concentration in the atmosphere has a fertilization effect, but they noted this should diminish over time as plants face nutrient limitations in a warming world.

Canadell and Wang also said: "It is clear that the benefits of a greening Earth fall well short compared to the estimated negative impacts of extreme weather events (such as droughts, heat waves, and floods), sea level rise, and ocean acidification."

Additional experts have said rising temperatures can have negative effects on vegetation -- and higher atmospheric CO2 can alter crops' nutritional content. Other studies have found higher temperatures will negatively affect the crop yield of global dietary staples such as wheat.

Ranga Myneni, a professor at Boston University's Department of Earth and Environment, also worked on the 2016 study. He told AFP in a December 13, 2022 email that focusing on a "short-term effect of enhanced plant growth from higher CO2 concentration misses the important point."

He added: "I have tried many times to put our results in context, yet some folks are intent on narrowly interpreting our work."

Myneni pointed to his more recent research published in Biogeosciences in 2021, which revealed "a slowing down of greening and strengthening of browning trends, particularly in the last two decades."

He also said carbon emissions from human activities like fossil fuel burning and deforestation are responsible for increasing CO2 concentration in the atmosphere -- a fact confirmed by the International Intergovernmental Panel on Climate Change's latest report.

"There are NO upsides to high CO2 concentration in the atmosphere," Myneni said.