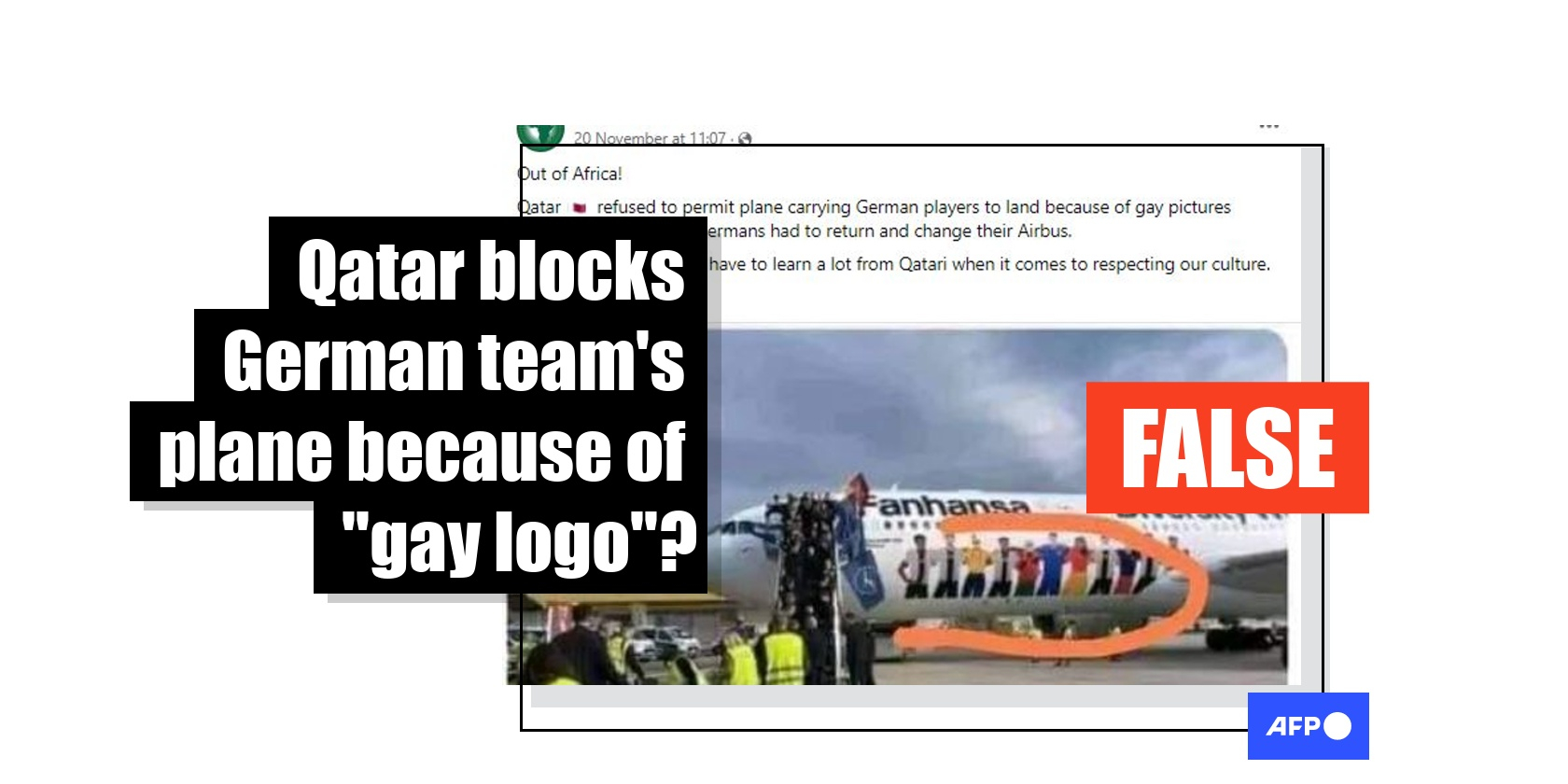 Facebook posts shared thousands of times in Africa claim that a Lufthansa plane carrying the German football team to Qatar for the 2022 World Cup tournament was banned from landing because of its “gay logo”. But the claim is false: the players flew to Oman on the so-called "Diversity" plane for a friendly match, before switching to a smaller aircraft without any branding to head to Qatar. AFP Fact Check also found that “Diversity” landed in Doha on at least three occasions in November 2022.

On November 20, 2022 - the day the FIFA World Cup 2022 kicked off in Qatar, a Facebook post shared two images: one showing a Lufthansa plane purportedly branded with “gay pictures” and another of an aircraft with an indistinct name.

“Qatar refused to permit plane carrying German players to land because of gay pictures around the plane. The Germans had to return and change their Airbus. I think African countries have to learn a lot from Qatari when it comes to respecting our culture (sic),” reads the post published on November 20, 2022.

It was shared by a Facebook page called “Inside Africa” with more than 300,000 followers.

The page’s administrators are based in Kenya, South Africa and Egypt, according to Facebook’s transparency section. 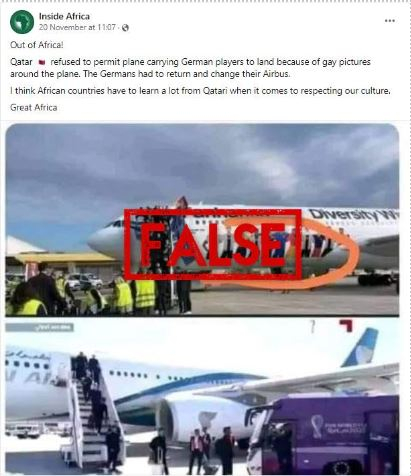 Similar posts were published on Facebook accounts in Nigeria and Zambia – seemingly in support of Qatar for banning the plane with a “gay logo”.

“Qatar is the pride of the Arabs,” one post says.

The treatment of the LGBTQ community people has been of serious concern since football’s governing body FIFA announced the 2022 World Cup would be hosted by Qatar, a conservative nation that criminalises homosexuality and sex outside marriage.

The claim has also been shared in French-speaking countries in Africa (see here and here).

The ”Fanhansa” livery on the German plane in question features an illustration of people from different ethnic backgrounds standing shoulder-to-shoulder beneath the words “Diversity Wins.”

According to German airline Lufthansa, the mural is a symbol of inclusion “regardless of gender, age, ethnicity, religion, nationality, identity or sexual orientation”.

However, the “diversity” plane, as it has been referred to, was neither denied entry nor were German players forced to use another plane to fly to Qatar.

The team left Germany aboard the “Diversity” Airbus A330-343, serial number D-AIKQ, on November 14, 2022, and landed in Oman's capital Muscat for a friendly match before continuing on to Qatar.

Lufthansa spokesman Martin Leutke shared a video of the departing plane on Twitter.

Team Germany is on its way… ⚽️ @DFB_Team@lufthansaNewspic.twitter.com/50fbH6PXyh

A photographer for Getty Images took a picture of the football players before they boarded. 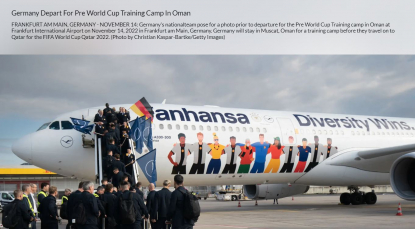 AFP Fact Check traced the flight path of the plane on FlightAware, a website which maps global air traffic. 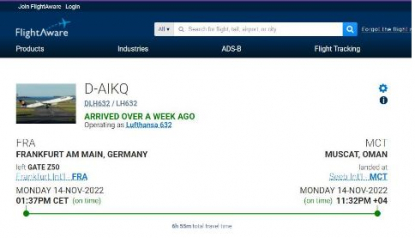 According to the flight data, the plane flew from Frankfurt to Muscat on November 14, 2022, before returning to Dubai and then Frankfurt the next day. 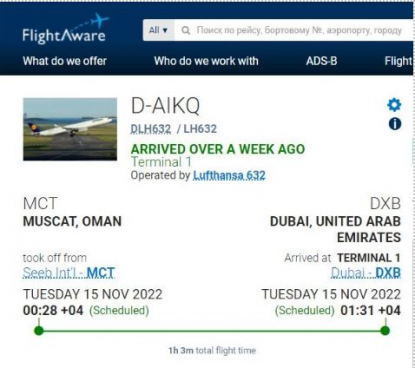 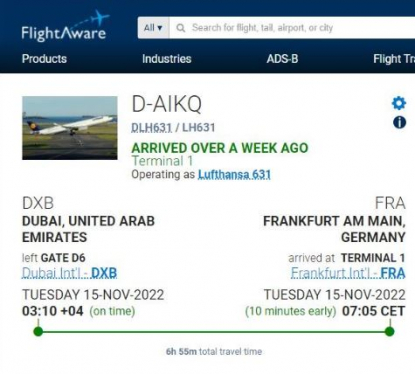 Lufthansa confirmed the flight details to AFP Fact Check on November 21, 2022, adding that the team travelled to Qatar from Oman on a small local plane without any branding.

According to Lufthansa, the choice of a smaller plane was for ecological purposes as it was less polluting and sufficient to transport the team and staff.

Days earlier, on November 11, 2022, the German Football Federation also explained in a statement that “an en-route flight with Lufthansa would mean empty flights from Germany to Muscat and back from Doha. DFB and Lufthansa have jointly decided in advance on this variant of the journey.”

While the German players did not fly into Qatar on the “Diversity” plane, the aircraft has landed in the Muslim country on other occasions.

A search on FlightRadar, another website monitoring flight traffic, revealed that the plane touched down in Doha on November 16, 18 and 19, 2022, with no restrictions. 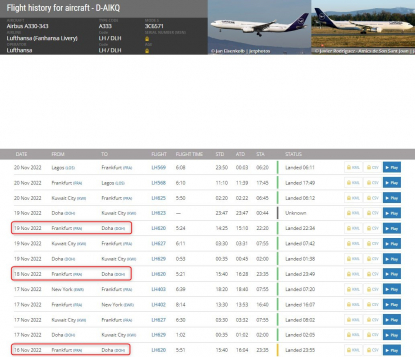 Screenshot from the FlightRadar24 website showing the “diversity” plane landing in Doha, taken on November 22, 2022

Lufthansa also confirmed that passengers flew into Qatar onboard the company’s specially-branded plane in November 2022.

Qatar has come under scrutiny over its human rights record, including its treatment of foreign workers and its stance on women's and LGBTQ rights.

Days before the tournament, Qatari World Cup ambassador Khalid Salman called homosexuality a “damage in the mind” and “haram” -- an Arabic term meaning “forbidden” -- during a German TV interview, sparking criticism in Europe.

As a show of solidarity with the LGBTQ community, captains from several leading European countries, including England, France and Germany, said they would wear armbands in rainbow colours with the message “One Love” during the tournament in an anti-discrimination campaign.

But they backtracked after warnings from FIFA that they would be penalised for doing so.

FIFA spokesman Bryan Swanson, who is gay, has insisted that all are welcome at the event.