A press release attributed to Nigeria’s electoral authority claims that the ruling party's presidential candidate Bola Tinubu is being investigated over a US drug case from 1993. The statement circulated in Facebook posts with pictures of court documents as alleged evidence. Some online users speculated Tinubu faced disqualification from the election as a result. But these claims are false: although the US court documents are genuine, the press release is fake and the country’s electoral commission has denied launching a probe. In any case, Nigerian law only bans contenders from running if they have been convicted of criminal offences in the decade preceding the election. A Nigerian TV station was fined and forced to apologise after it ran a news piece about the press release as being real.

“The Electoral Commission said it is currently discussing with the Northern Illinois District Court in the United States to get confirmation of the allegations against Tinubu before taking appropriate action,” reads a post written in Hausa and published on November 12, 2022. 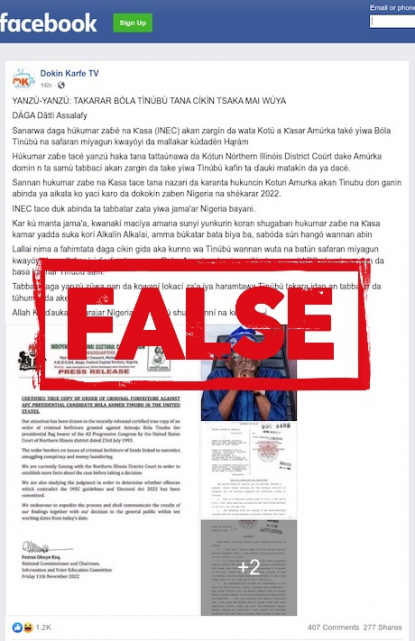 The post refers to a “press release” purportedly issued by the Independent National Electoral Commission (INEC) on November 11, 2022, announcing it was looking into a 1993 old case involving Tinubu. According to the alleged statement, he forfeited a large sum to the US government in a drug case involving money laundering.

Other photos in the Facebook post – which has since been deleted – included pictures of Tinubu and the court documents.

The post also claimed Tinubu could be banned from contesting the election if the “accusations are confirmed”.

Paul Ibe, the spokesman for opposition candidate Atiku Abubakar, shared the court filings in a tweet on November 8, 2022. 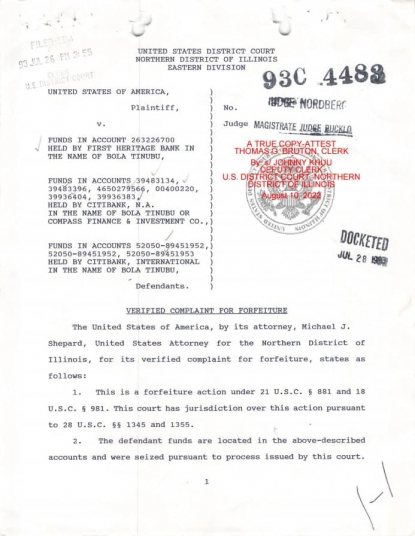 A copy of the US court document

However, the claims that INEC is investigating Tinubu are false.

Tinubu had indeed been linked to a 1993 case in Chicago involving drug trafficking and money laundering. However, he reached a settlement with the US government and was asked to forfeit $460,000 from the American accounts he had held.

The court documents shared on social media stem from that case and are authentic, an AFP journalist in the US confirmed. But they do not mention that Tinubu was indicted or convicted.

In addition, the INEC issued a statement dismissing the investigation claim as “utterly fake”.

A Press Release purported to have been issued by the Commission has been trending online since yesterday Friday 11th November 2022. It claims that the Commission has commenced investigation into a case of criminal forfeiture against one of the pic.twitter.com/fi8oKFanBT

A search of the electoral commission’s social media pages revealed a press release published on November 11, 2022, which addressed an electoral matter regarding ballots. There was nothing about Tinubu.

Arise TV, which had run a news segment about the alleged press release, issued a retraction and apologised to Tinubu. The broadcaster was fined by the Nigerian broadcasting regulator for violating Section 5.0.1 of the Nigeria Broadcasting Code, which deals with the need for news to be “truthful and accurate”.

INEC released the latest Code of Conduct guidelines on June 3, 2022, and prescribes the regulations that “govern the conduct of elections”.

Section 84 (3) of the Electoral Act 2022 upholds the disqualification criteria listed in the Nigerian Constitution.

Section 137, which applies to presidential candidates, states that a person is not eligible to stand if they have been sentenced to death, imprisoned, or fined by a Nigerian court or a tribunal “for any offence involving dishonesty or fraud (by whatever name called) or for any other offence.”

The Constitution further stipulates that such individuals cannot contest a presidential race “within a period of less than 10 years before the date of the election to the office of President he has been convicted and sentenced for an offence involving dishonesty or he has been found guilty of the contravention of the Code of Conduct.”

Nigerian criminal lawyer Arome Abu told AFP Fact Check that Tinubu would still have been eligible to run for president even if he had been convicted in the US in 1993.

Tinubu has come under intense scrutiny since he declared his bid for president at the beginning of the year, even more so after he won the nomination of the ruling All Progressives Congress.

His health, schooling, name and source of his wealth have all been subjects of controversies and false or misleading claims.

The latest scandal about the cash forfeiture gained momentum in the months after he was nominated as the APC candidate on June 8, 2022.

Tinubu went to university in the US and worked there for several years before he returned to Nigeria to work for ExxonMobil. He quit ExxonMobil to join politics and was elected a senator in 1992, about a year before the US court ordered the forfeiture.

AFP Fact Check has debunked several false or misleading claims linked to the 2023 election. You can find our coverage here.