Controversy has dogged the presidential ambitions of politician Bola Ahmed Tinubu who is vying for Nigeria's top job in elections scheduled for February 2023. The polemic includes allegations that he did not attend primary school. In response, his supporters posted a picture shared thousands of times on Facebook, claiming that it shows Tinubu as a schoolboy. However, this is false: AFP Fact Check found that the child in the photo is actually Nigeria’s Vice President Yemi Osinbajo.

“Asiwaju Bola Ahmed Tinubu and his primary school classmates,” reads one of the Facebook posts published on June 28, 2022. “It’s a shame that people you thought were a bit smart fell for such a cheap lie.”

The photo in sepia appears to show a class of primary school children and their teacher. A red arrow added to the image points to a boy seated in the far left corner. 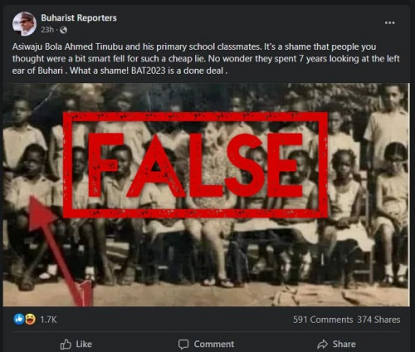 This particular post has been shared more than 350 times.

Tinubu is the presidential candidate for Nigeria’s ruling All Progressives Congress in elections set for  February next year.

The influential former governor of Lagos State was nominated during a party primary held in Abuja, Nigeria’s capital city, on June 8, 2022.

But his candidacy has been marred by controversy, especially after nomination forms submitted to Nigeria’s electoral body showed he did not fill in the names of his primary and secondary schools.

In response to the controversy, Tinubu’s supporters began circulating the class photo on social media, claiming the image showed him as a nine-year-old in primary school.

His presidential campaign spokesman Bayo Onanuga did not respond to AFP's questions about the picture or provide the name of the schools Tinubu attended.

AFP Fact Check conducted a reverse image search and found the photograph was published online by a blog called sportafriq.com on November 25, 2015.

The same picture was also published on Nairaland, one of the most visited websites in Nigeria, on April 13, 2022. Both publications said the picture showed Nigeria’s Vice President Yemi Osinbajo and his classmates in primary school, and not Tinubu.

Sportafriq.com credited “Corona Schools” as the source of the picture and identified Osinbajo as the child in the bottom row, seated far left.  Osinbajo’s official profile shows he attended  “Corona School Lagos”.

An email sent to Corona Schools went without reply. A school official also ended the phone call when asked about the picture. Subsequent calls were unanswered.

Osinbajo, who was among the 13 people Tinubu defeated at the APC presidential primary, used the same picture in a video he posted to his Facebook and Instagram pages on October 5, 2021, to celebrate World Teachers’ Day. The picture shows up 55 seconds into the video. 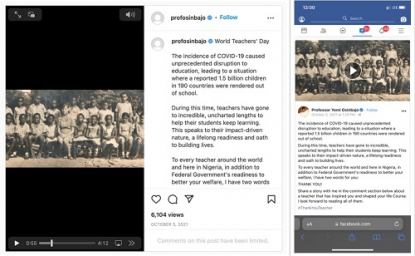 Screenshots showing the school picture as used in a video posted on Instagram and Facebook by Osinbajo, taken on June 30, 2022.

The Nigerian Constitution requires anyone running for president to have “been educated up to at least School Certificate level or its equivalent.” The university certificate Tinubu listed is above the minimum requirement.

Segun Ayobolu - Tinubu’s former press secretary when he was the governor of Lagos State - wrote in January that Tinubu attended primary and secondary schools in Nigeria, without naming them.

He said, however, that Tinubu did not finish secondary school in Nigeria.