Photos of former Philippine vice president Leni Robredo with a man wearing an Arabic headdress have been shared hundreds of times in posts that falsely claim she wore inappropriate clothing during a trip to Saudi Arabia. In reality, the images show Robredo attending Saudi Arabia's National Day celebration in a hotel in the Philippine capital, Manila, in 2018. AFP has not found any evidence the former vice president traveled to Saudi Arabia during her term.

One image shows Robredo walking alongside a man wearing an Arabic headdress in a room where Saudi flags are displayed. The other two are close-up photos of her green dress.

The tweet, which has been shared more than 230 times, has a Tagalog caption that reads: "You keep attacking PBBM for wearing a Barong… but did you criticise your 'mother' who wore a see-through dress when she went to the Middle East, which is a very conservative country?" 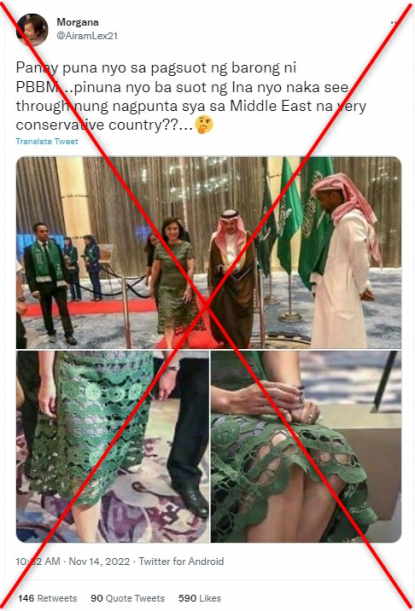 The claim circulated shortly after Philippine President Ferdinand "Bongbong" Marcos Jr -- also known as PPBM, his initials -- was mocked for wearing the national attire barong Tagalog, instead of a suit and tie, during the ASEAN summit in Cambodia, held from November 8 to November 13, 2022.

Marcos defeated Robredo in the Philippine presidential election in May 2022.

Similar posts that claim Robredo dressed inappropriately while visiting a foreign country have circulated for years, since at least 2018, for example on Twitter here, and on Facebook here and here.

Many social media users appeared to believe the images were shot in Saudi Arabia.

"In Saudi culture, this is a big insult. In a way, they were disrespected. Leni has no consideration for the very conservative and religious culture of the Middle East," one Twittter user wrote.

"The epitome of stupid. She was in the Middle East, but dressed up like that. How stupid," said another. 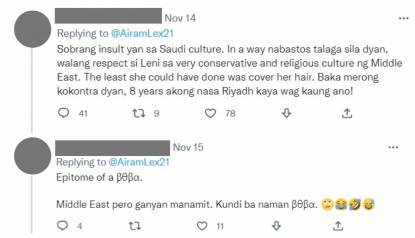 However, the photos were actually taken in the Philippines.

A reverse image search found the photos were part of an album published on Robredo's official Facebook page on September 25, 2018.

Shangri-La at the Fort is a hotel located in Manila.

Below are screenshot comparisons of the images in the false post (left) and the genuine photos from Robredo's Facebook page (right): A visual analysis of Robredo's photos and 360° images of the Shangri-La hotel in Taguig city shows the event was held at the hotel's Grand Ballroom.

Below are screenshot comparisons of Robredo's photos (left) and images from Shangri-La hotel (right), with corresponding features highlighted in red by AFP: Multiple keyword searches on Google did not find reports or official press releases that Robredo traveled to Saudi during her term as vice president from July 2016 to June 2022.

On November 19, 2022, Robredo's office told AFP: "She did not visit Saudi Arabia during her term as vice president."