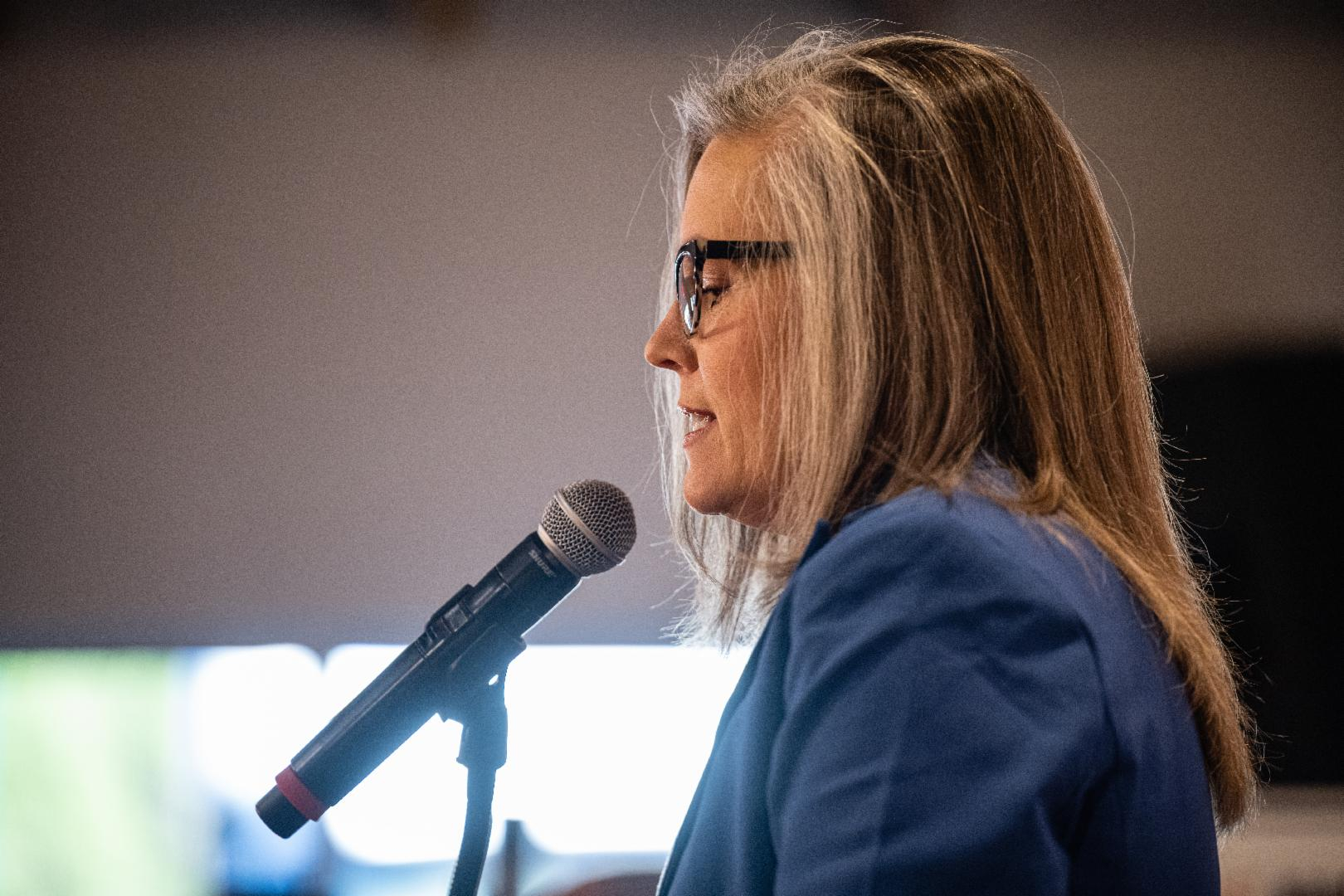 Social media users claim fewer votes were cast for governor than for state treasurer in Arizona during the November 8, 2022 midterm elections, a discrepancy some attributed to malfeasance. This is false; preliminary results show roughly 60,000 more votes were tallied in the governor's race, which experts say is typical.

"So in Arizona you mean to tell me more people showed up to vote for Treasurer than Governor," says a November 14 tweet, shared more than 10,000 times. 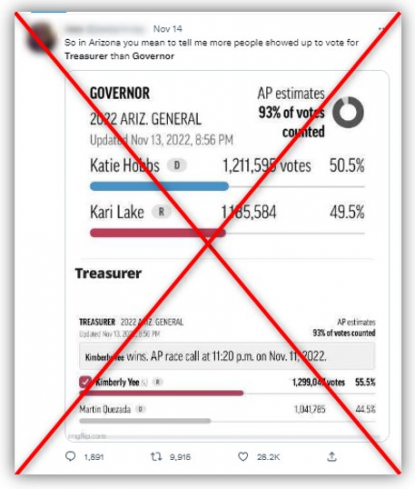 The tweet includes an image showing vote counts reported by the Associated Press (AP) as of November 13, at which point the outlet estimated 93 percent of ballots had been counted. The same image appeared alongside similar claims elsewhere on Twitter and other platforms, including Facebook, Instagram and Truth Social.

"Tell me how more people showed up to vote in Arizona for Treasurer than for Governor... #FRAUD," says one post on Truth Social. 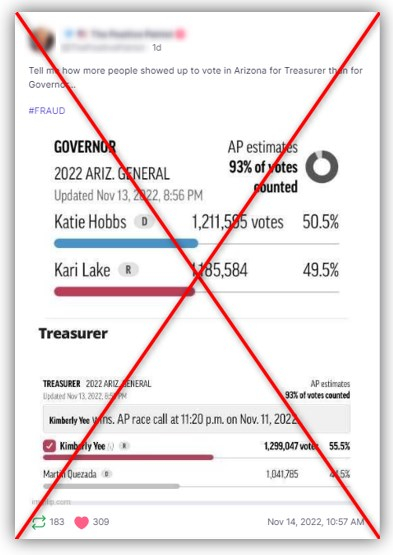 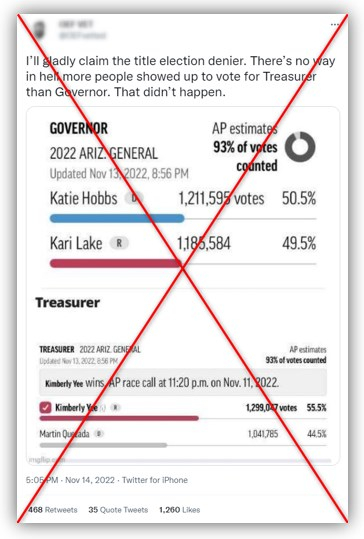 The posts spread as US media projected November 14 that Arizona Secretary of State Katie Hobbs, a Democrat, had defeated Republican Kari Lake to become the next governor. Lake, an outspoken supporter of false claims that the 2020 election was stolen from then US president Donald Trump, had not conceded as of 1930 GMT on November 16.

The claim circulating online is based on bad arithmetic. In reality, more Arizonans voted for governor than for treasurer.

The graphics shared online -- which appear to come from the website of a TV station in Phoenix -- show more than 2.39 million votes had been reported in the governor's race as of November 13, compared with roughly 2.34 million in the treasurer's race. On November 11, incumbent Republican Kimberly Yee was projected to win the latter contest against Democratic challenger Martin Quezada, an Arizona state senator.

As of 1930 GMT on November 16, the Arizona secretary of state's office reported on its website more than 1.27 million votes for Hobbs and 1.26 million for Lake, for a total of around 2.53 million votes.

The website also showed more than 1.37 million votes for Yee and nearly 1.1 million for Quezada, totaling about 2.47 million.

That equates to 60,000 more votes cast for governor than for treasurer, contrary to the posts online.

"These claims are nothing more than attempts to undermine the will of the voters and to sow distrust in our election processes," said Sophia Solis, deputy communications director for the Arizona secretary of state.

Other widespread social media posts sharing the same AP vote counts suggest it is suspicious that Lake received fewer votes for governor than Yee did for treasurer.

But Jan Leighley, an American University professor who studies US political behavior and voter turnout, told AFP: "It is not uncommon for voters to 'roll-off,' voting only for the high-level offices ... That has never been identified as evidence of fraud."

Tammy Patrick, a former elections official in Arizona's Maricopa County, added: "There can easily be variation in the number of ballots cast versus the number of votes cast in a given race: Voters do not have to vote on every contest."

Down-ballot candidates often attract greater support from unaffiliated and moderate voters than party stalwarts running for higher office -- in part due to their lower profiles, according to Charles Stewart, a political science professor at the Massachusetts Institute of Technology (MIT). Yee is the incumbent and has a long history of service in the state, he said, while Lake was a controversial newcomer.

The same ballot roll-off phenomenon played out in several other states during the midterms.

In Massachusetts, for example, the incumbent secretary of state and incumbent treasurer each received more votes than fellow Democrat Maura Healey, the projected winner of the governor's race, according to The New York Times.

"People who are using the number of down-ballot votes cast for candidates as evidence for election fraud don’t know how elections work, or how algebra works, for that matter," Stewart said.

The US Cybersecurity and Infrastructure Security Agency said in a November 9 statement: "We have seen no evidence that any voting system deleted or lost votes, changed votes, or was any way compromised in any race in the country."

AFP has debunked other misinformation about the midterm elections in Arizona here and here.