Social media users claim an image shows US Congresswoman Marjorie Taylor Greene making a Nazi salute and wearing a red Soviet Union T-shirt. This is false; the picture appears to be digitally manipulated, and a version featuring a different person has been online for more than a decade. Greene's spokesperson confirmed it is not a real depiction of the Georgia Republican.

"MTG not a fascist? Well, this old picture proves she is," says one October 31, 2022 tweet, which Twitter labeled as "manipulated media." 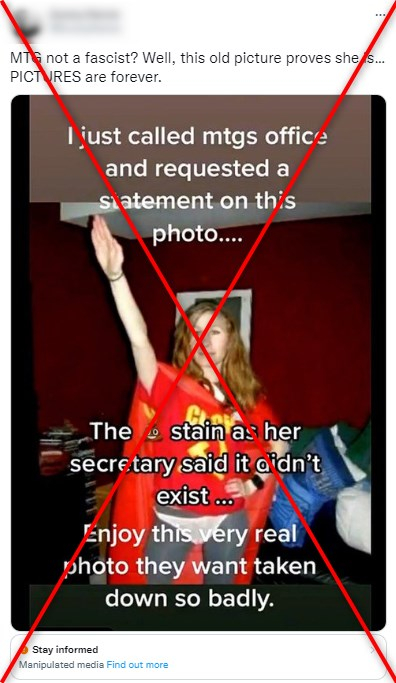 The image in the tweet is low-quality, but it appears to show Greene wearing underwear over a pair of gray tights, a red cape and a red T-shirt adorned with a hammer and sickle -- a symbol associated with communism and the Soviet Union -- and "CCCP," the Russian-language abbreviation for the Soviet Union.

But a reverse image search using the search engine TinEye revealed that another version of the image has been online since at least 2008, the year that TinEye launched.

The older version of the picture shows a different person than Greene.

It is unclear who is in the earlier version of the photo, and AFP could not trace the photo's origins.

Siwei Lyu, director of the Media Forensic Lab at the University of Buffalo, said the image circulating online is too low quality and heavily compressed to fully analyze, but that it appears the face is the only region that has been changed in the photo.

AFP has previously debunked manipulated images of US politicians here and here.