Old footage of Bill Gates speaking about Covid-19 vaccines is circulating in social media posts that falsely link his comments to a wave of child deaths in Indonesia from kidney problems. The posts falsely claim the billionaire philanthropist predicted that side effects from the vaccines would appear after two years, apparently blaming the jabs for the deaths. However, Gates was in fact calling for authorities to approve Covid-19 vaccines quickly, not "predicting" side effects. Indonesian authorities linked the deaths to syrup medicines which have since been banned, not Covid-19 vaccines.

The video of American billionaire philanthropist Bill Gates speaking in a TV interview in April 20220 was uploaded here on Instagram on October 22, 2022, where it has been viewed more than 48,000 times.

"Bill Gates says the side effects of Covid-19 vaccines will appear after two years," reads Indonesian-language text in Indonesian superimposed on the footage.

The clip also included a screenshot of tweet from Indonesian anti-vaccine former physician Dr Lois Owen from June 2021, which shared Gates' video interview and claimed that Covid-19 vaccines would cause kidney failure, among other conditions. 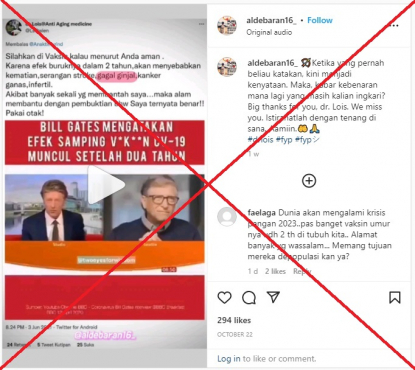 The posts was shared days after the Indonesia health ministry announced in mid-October 2022 a spike in child deaths from acute kidney injury in Indonesia.

Acute kidney injury cases, which had killed nearly 200 children since the end of August 2022, prompted the government to launch an investigation and ban the sale of some syrup medicines linked to the deaths, AFP reported on November 9, 2022.

The Indonesian health ministry has blamed the acute kidney injury cases on harmful substances -- such as ethylene glycol and diethylene glycol -- found in several medicinal syrups.

The screenshot of the late Dr Lois' tweet and Gates' video interview also appeared in October 2022 alongside a similar claim on Instagram here and here, on Facebook here, on TikTok here and Twitter here, garnering more than 2,300 Likes.

However, the claim is false: Gates did not say that side effects from Covid-19 vaccines would appear after two years.

In the full interview, which aired on the UK morning show BBC Breakfast on April 12, 2020, the American philanthropist pointed out that testing Covid-19 vaccines for two years to check for side effects would slow down the vaccine roll-out by two years.

He was responding to a question about the impact of a quick Covid-19 vaccine roll-out on vaccine safety.

BBC presenter Charlie Stayt asked: "As I understand it then, what you're saying is that it may be that there needs to be some compromise in some of the safety measures that would normally be expected to create a vaccine because time is so crucial."

Gates replied: "Well, of course, if you want to wait and see if the side effect shows up two years later, that takes two years."

"So, whenever you're acting quickly like during the HIV crisis, they created a quick way of getting drug approval. There is a trade-off there. In that case, it worked super, super well."

The exchange can be found from the interview's 8:23 mark.

Britain was the first western country to approve a Covid-19 vaccine for general use on December 1, 2020, when the UK's medicines regulator gave its green light to the Pfizer-BioNTech jab, and kicked off the mass vaccination campaign a week later.

Meanwhile, Indonesian health authorities have not recorded any deaths found to be caused by Covid-19 vaccination, as of November 14, 2022.

The chairman of Indonesia's National Commission on Post-Immunization Accidents (Komnas KIPI) Hindra Irawan Satari told AFP on November 4, 2022, that the agency had not recorded any deaths caused by the jab.

The commission said in June 2022 that it had received 4,114 reports of "post-immunization incidents" since the start of Indonesia's vaccine roll-out in January 2021. However, after investigation, it found that most of the reports were not caused by Covid-19 vaccines.

Health ministry spokesperson Dr M. Syahri said in a statement on October 18, 2022: "Until now, the acute kidney failure incidents are not linked to Covid-19 vaccinations or Covid-19 infections."

AFP has debunked false claims that acute kidney injury cases in Indonesia are caused by Covid-19 vaccines given to children and to pregnant or breastfeeding mothers.