A TikTok video viewed more than 12,000 times claims hurricanes can be controlled and used as weapons. This is false; the clip cites two abandoned patent applications for proposed methods to avert disasters, and experts say no such technology exists.

"Tornado hurricane patents... Do you get it yet? ... The weather is weaponized and controlled," says text over the video, which shows pages from the two patent filings.

The two documents propose different ways of diverting hurricanes: one by directing sound waves at them and the second by sending jet planes with afterburners to heat up the center of the storm.

"For anyone questioning if they can control hurricanes and tornados, the answer is yes," says the TikTok post's author in a comment on the video.

The clip accumulated more than 12,000 views after being published September 28, 2022. Similar claims have circulated on Instagram and Twitter. The posts surfaced after Hurricane Ian made landfall in the United States on September 28 as one of the strongest storms to ever hit the country. It killed more than 100 people in Florida and North Carolina and caused billions of dollars of damage.

Scientists say human-caused climate change is making hurricanes more intense and potentially more destructive. But claims that such storms can be controlled are false; the patents cited in the videos were never granted, and the technology proposed in the applications was not developed.

A search for the documents on Google Patents reveals the patent applications for sound wave and jet plane methods were never fulfilled.

The first proposal says it "relates to a method of weather control ... employing high decibel sound waves to affect the formation of weather systems."

Among the technology's stated aims: "to alter the direction of weather systems which may produce hurricanes and tornadoes" and "disrupt or enhance the formation of hurricanes."

The second application says the invention was intended to save lives and prevent damage by "controlling hurricanes or modifying the weather." 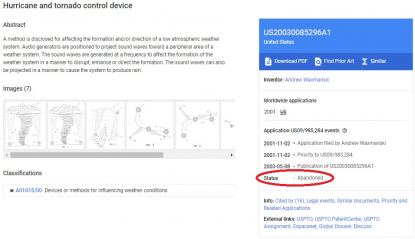 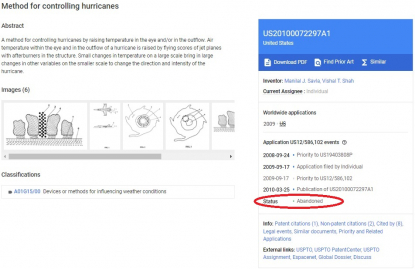 One of the two people named as authors of the second patent application, Manilal Savla of New Jersey, told AFP it "was abandoned and to my knowledge the technology has never been deployed."

"I was shocked to learn about the false references and misrepresentation of my patent application in the TikTok video as well as in comments," he said in an email on October 18, 2022.

"My proposal regarding hurricane was not to weaponize it but to avert a catastrophe by reducing its strength and/or diverting it to sea. The idea was to save lives and property damage."

Experts told AFP there is no way to control hurricanes, also known as cyclones.

"Based on the current state of knowledge, this is not feasible at this time," said Jayantha Obeysekera, director of the Sea Level Solutions Center at Florida University International, in an email on October 19, 2022. "Perhaps the only way to control would be to mitigate greenhouse gases and moderate the effect of climate change."

The claim that hurricanes could be controlled or weaponized "is a far-fetched idea," he added.

The National Oceanic and Atmospheric Administration (NOAA) pointed to an article published by its Atlantic Oceanographic and Meteorological Laboratory. It lists "numerous techniques that have been considered over the years to modify hurricanes."

"As carefully reasoned as some of these suggestions are, they all share the same shortcoming: They fail to appreciate the size and power of tropical cyclones," the article says.

AFP has published other fact checks about hurricanes here.