Videos purportedly showing popular Filipino physician Dr Willie Ong endorsing a "lipoma removal cream" have been viewed tens of thousands of times in multiple Facebook posts in the Philippines. The videos, however, have been misleadingly edited. While Dr Ong had been filmed speaking about the treatment of lumps on the body, he did not advertise any products and told AFP the endorsement was fake. Experts say creams cannot remove lipomas. The Philippine Food and Drug Administration also has no "lipoma removal cream" registered in its product database.

It shows clips of popular Filipino doctor Willie Ong, a physician who found fame by giving medical advice on YouTube before running for vice president in 2022, talking about treatment for lumps found on the body.

He is heard saying: "We can always do something about it. It's simple. Whatever problem that will be found can be addressed. The treatment is just quick."

Above the clips of Ong is a Tagalog advertisement that translates as: "Effective treatment for LUMPS! Gently massage on lumps, cyst and lipoma. Use 2x-3x a day".

A lipoma is a harmless fatty lump that grows under a person's skin.

The last 10 seconds of the video shows a full screen advert for the product, displaying an image of Ong with his wife, physician Dr Liza Ong, alongside claims the cream is "helpful" for treating conditions such as tumours, cysts, lipomas and swollen lymph nodes.

An image of the product shows a jar of cream labelled in simplified Chinese reading "Yunnan herbal lipoma cream", made by a company called "Jiuxiang Tang". 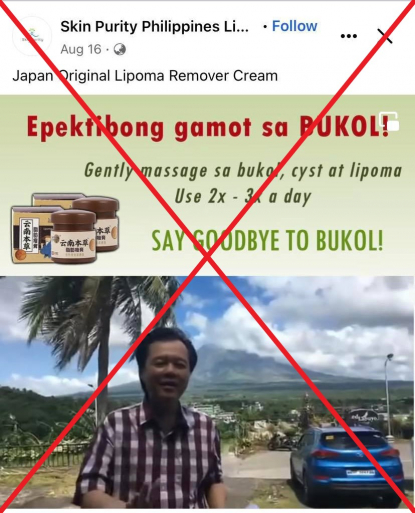 Another asked: "How much is it, Doc Willie?"

However, neither Ong nor his wife have endorsed the product.

The clips of him speaking about treating lumps were taken from a longer video on his YouTube channel and misleadingly repackaged.

Ong told AFP that the posts are "fake".

"I am supporting only one product using my name, which is an adult milk supplementation. All other products using my name are fake," he said on September 23.

His wife also has not endorsed the product, Ong said.

No topical creams able to remove lumps, cysts and lipomas existed to the extent of his knowledge, Ong said, adding: "They can be surgically removed if deemed necessary."

Dr Jarische Lao-Ang, a dermatologist from the Philippine Dermatological Society, also dismissed the claim that creams can cure lipoma and lumps.

She told AFP: "The treatment of choice for lipoma is surgical excision. Applying creams won't be able to remove the growth underneath the skin."

She added that it is not currently possible "for any topical cream to remove lumps or growths or even enlarged lymph nodes".

The clips of Ong speaking were taken from a longer video that was published here on his verified YouTube channel on November 6, 2018. He does not endorse any products in the video.

The video is titled: "How to remove and treat Lump to your Body - by Doc Willie Ong".

Below is a screenshot comparison of the video as used in a misleading Facebook post (left) and the original video (right):

Snippets of the video, in which Ong encourages viewers to seek medical advice from doctors, were used in the misleading posts to give the impression he was endorsing the "lipoma remover cream".

"It's simple... Any illness may be addressed, so don't be afraid [to go to the doctor]. Whatever problem that will be found can be addressed," Ong says at the video's 2:18 mark.

"For hyperthyroidism, you should check with an endocrinologist. The treatment is just quick," he is heard saying at the video's 4:33 mark.

Not registered with regulator

The Philippine Food and Drug Administration (FDA) told AFP that the product has not been registered.

Keyword searches on the FDA's databases did not find any listing for the manufacturer or the product.