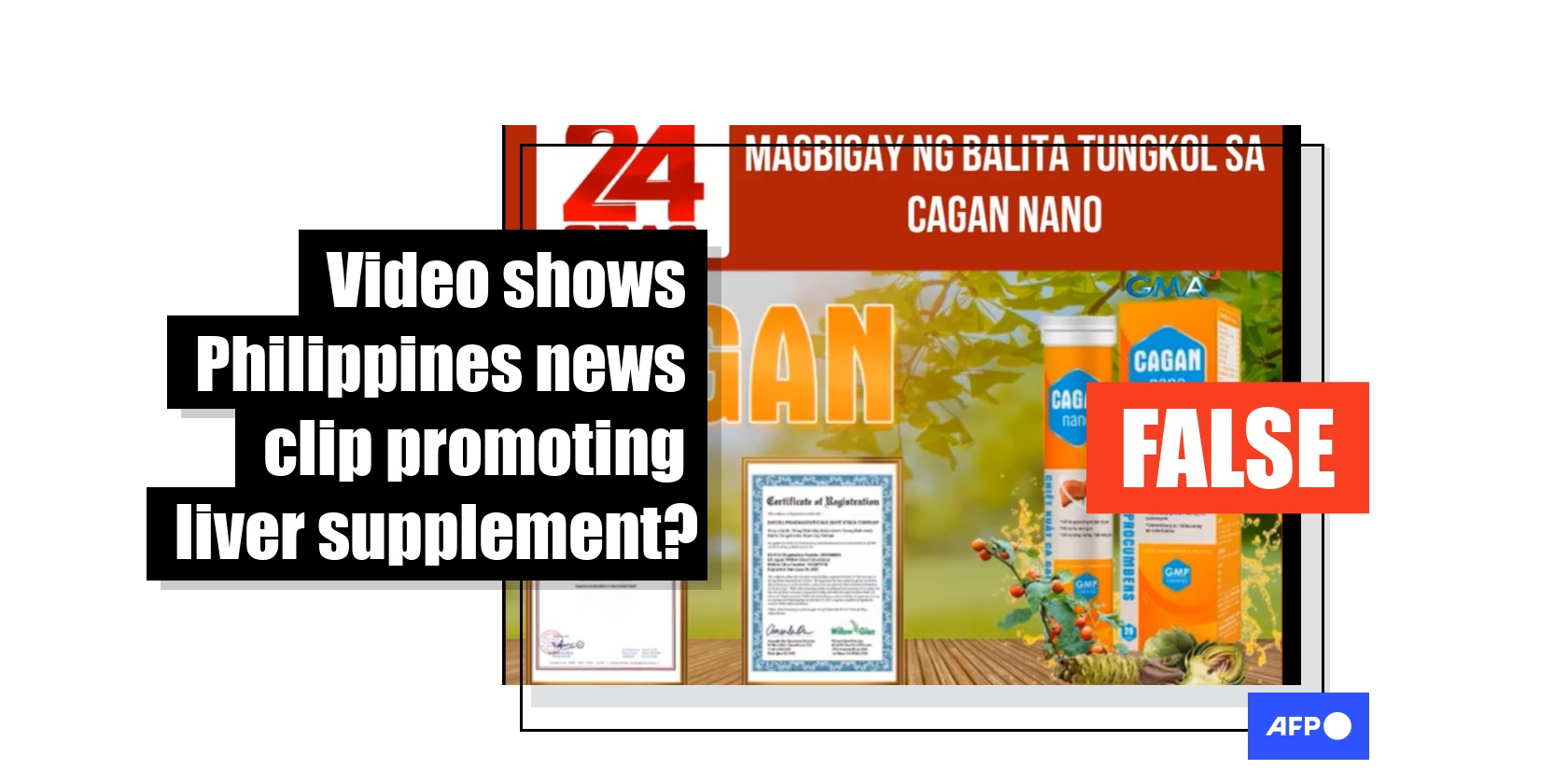 
A purported news report about a liver supplement with "guaranteed therapeutic effects" supposedly approved by Philippine health authorities and endorsed by doctors has been viewed more than one million times on Facebook. However, the video has been created from old news and advertising clips in order to promote an unregistered supplement that the Philippine Food and Drug Administration (FDA) said it had not approved.

The video was posted here on Facebook on August 4, 2022. It has been viewed more than one million times.

It appears to show a segment from 24 Oras -- an evening news show on the Philippine television channel GMA -- with journalist Arnold Clavio saying:  "About eight million Filipinos have hepatitis B, according to the Department of Health.

"To celebrate World Hepatitis Day, a group is calling to remove the stigma around people who suffer from the condition. Cedric Castillo reporting."

At the video's 18-second mark, it shows a purported interview with Ian Homer Cua, president of the Hepatology Society of the Philippines (HSP) who has since said in a Facebook post that his image was used to create "fake news" for the supplement advert.

As Cua's face is shown in the fabricated video, a narrator can be heard saying in Tagalog: "After many years of research, we successfully used exclusive nanotechnology from Germany to destroy broken liver cells to support the treatment of hepatitis, liver failure, cirrhosis, liver cancer."

The video then cuts to clips promoting a supplement called Cagan Nano, which it claims is "100 percent natural" and can "deeply penetrate cells to restore them, and helps lower liver enzymes".

It claims Cagan Nano's "advanced technology" meets global standards and says the product has been approved by drug regulators around the world, and has been vetted by the United States National Academy of Sciences.

The caption reads: "Good news for people with liver disease has appeared in the Philippines." It claims liver disease patients can take the supplement "twice a day" to "reverse hepatitis (sic)" in order to "avoid hospital visits". 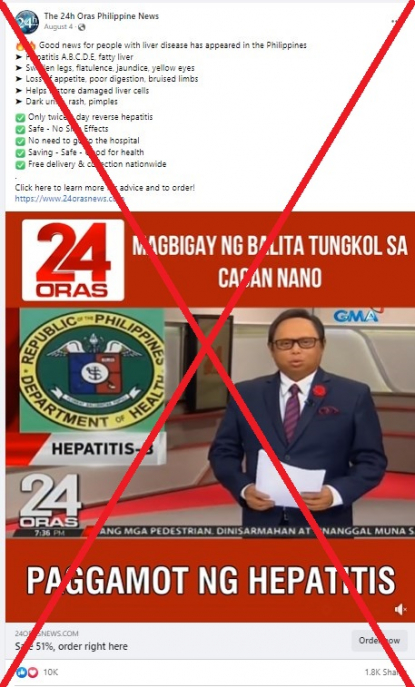 Philippines health authorities have termed liver disease a "silent epidemic", the state-run Philippine News Agency has reported, with more than 18 million Filipinos estimated to be at risk of fatty liver disease.

However, the claims in the video -- posted by an account impersonating the official 24 Oras Facebook page -- are false.

The video has been created using news clips from Philippines broadcaster GMA that were posted on its official YouTube channel in 2017.

The opening 15-second clip of news anchor Arnold Clavio was taken from this July 2017 report about the social stigma faced by those infected with hepatitis B.

The next clip of the interview with HSP president Cua was taken from this January 2017 report, in which he explains the difficulties of diagnosing people with hepatitis B.

Below are screenshot comparisons of the doctored video (left) and the original 24 Oras news reports (right): 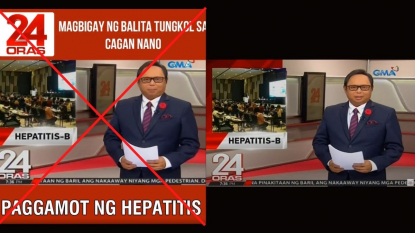 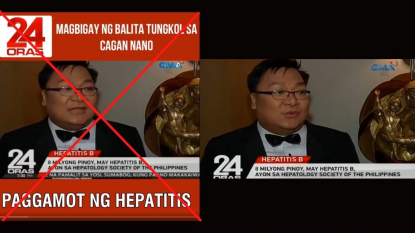 The Philippines FDA Centre for Drug Regulation and Research director's office told AFP the product was unregistered and warned people to be wary of such adverts on social media.

"To ensure the safety, efficacy, and quality of health products, please ensure to only purchase health products from an FDA-licensed establishment," it said.

Cagan Nano has also not been approved by the United States' Food and Drug Administration, a keyword search also found.

In a warning issued on August 19, 2022, the HSP denied endorsing the supplement and advised patients to consult a doctor for any liver-related concerns.

“HSP is NOT connected in any way with Cagan Nano Supplement. It also DOES NOT support its claims for liver diseases," it said.

Dana Korsen, director of media relations for the US National Academy of Sciences, also told AFP it had not endorsed or vetted Cagan Nano.

"I’m not aware of any vetting by the National Academy of Sciences of this product," she told AFP.