A video on Facebook and TikTok claims to show lawyers of four dissenting electoral commissioners being removed from Kenya's Supreme Court in Nairobi during a hearing challenging the outcome of the August presidential ballot. But this is false: the clip was filmed in 2020 and shows the removal from Kitui County Assembly premises of lawyers representing a former governor facing impeachment.

The video shows a group of men dressed in suits being escorted from a gated building and was published on Facebook on August 30, 2022.

"The lawyers hired by Cherera and commissioners being chased out of the Supreme Court (sic)," reads the post, which has been shared more than 80 times. 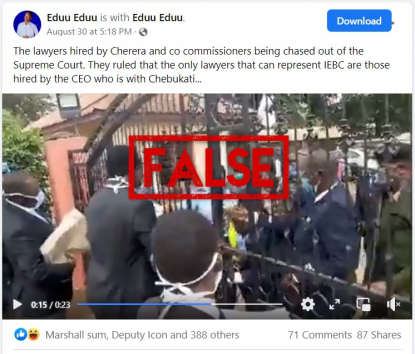 Juliana Cherera was one of four commissioners of Kenya's electoral body who disowned the result of the election held on August 9, 2022, which saw William Ruto beat his rival, veteran politician Raila Odinga.

The Independent Electoral and Boundaries Commission (IEBC) took six days to announce the outcome, eventually declaring Ruto the winner with 50.49 percent of the votes to Odinga’s 48.85 percent.

However, Cherera and three other electoral commissioners accused the tallying process of being “opaque.”

Odinga challenged the result in court, but the seven-judge bench unanimously upheld Ruto's win on September 5, 2022. The four commissioners changed tune, saying that they respected the court’s ruling.

The dissenting commissioners had earlier attempted to appoint lawyers to represent them separately during the hearing, but the court rejected their request, arguing that it only recognised lawyers appointed by the commission’s chairman because they all worked for the same agency.

The claim about the video - which was also shared on TikTok multiple times, including here, here and here - is false.

Using the video verification tool InVid-WeVerify, AFP Fact Check ran reverse image searches on keyframes from the clip and found that the original footage has been on YouTube since 2020.

The footage was also used by local news channel NTV Kenya which aired a section of the clip in one of its news bulletins on June 30, 2020.

“Drama as governor Ngilu’s lawyers are manhandled at Kitui County Assembly,” the caption on the clip reads.

Ngilu, summoned by the assembly to defend herself against allegations of corruption, had sent lawyers to represent her just days after the high court had issued a temporary order against her impeachment.

Kitui is about 170km away from Nairobi, where the country’s Supreme Court is located.