US Marines at Biden speech were real, not on green screen

A TikTok video with hundreds of thousands of views claims the US Marines who flanked President Joe Biden during an early September 2022 primetime address were not real, but part of a green screen. This is false; video and photo evidence shows a live backdrop behind Biden and the two servicemen moving before and after his speech.

"Marines?? Were they really there?" says text in a TikTok video that received more than 241,500 views and hundreds of thousands more across social media.

The speaker in the video, which shows a Fox News broadcast of Biden's September 1, 2022 address in Philadelphia, Pennsylvania, claims the Marines positioned behind Biden were not real because they were not clearly visible on the phone screen of a spectator filming the event. 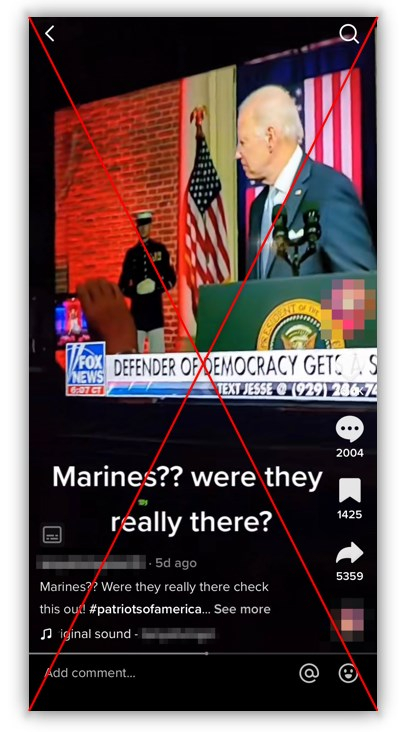 "See the two Marines right there next to Biden?" the speaker in the TikTok video says. "Well, there's a person videoing on their phone in the audience, and there are no Marines. Watch."

Several commenters on the TikTok video said it confirmed Biden was speaking in front of a green screen, while others described the Marines as "props," "cardboard cutouts," "poster board," "CGI" and "holograms."

Meanwhile, a website that has previously published fabricated stories about Democrats and the military claimed the service members were "crisis actors."

But the Marines were not hired actors or part of a digital backdrop.

"None of that is true," said White House spokesperson Chris Meagher.

The Marines referred AFP's inquiries to the White House.

Biden delivered his speech, in which he criticized former president Donald Trump and his "extremist" supporters as a danger to American democracy, outside Independence Hall in Philadelphia, where the Declaration of Independence and US Constitution were signed in the 18th century.

Footage of the speech shows the Marines walked out of the building and stood on either side of the door. The two servicemen saluted as the president and first lady walked toward the podium, then followed them back inside once Biden's speech concluded.

AFP captured both of those moments in the photographs seen below. 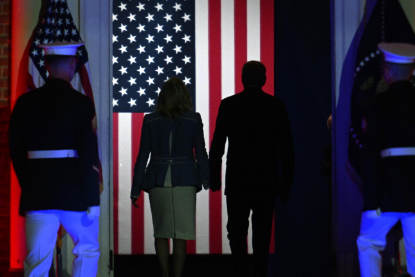 US President Joe Biden (C-R) and First Lady Jill Biden walk away after he delivered a speech outside of Independence National Historical Park in Philadelphia, Pennsylvania, on September 1, 2022 ( AFP / Jim WATSON)

The phone screen cited in the TikTok video, meanwhile, is blurry -- and the person holding it captured the speech from a faraway angle that obscured the backdrop behind Biden.

The Marines' presence at the president's speech later became a source of controversy. In a letter to Defense Secretary Lloyd Austin, Republican members of Congress decried the use of active-duty servicemen.

"The presence of the Marines at the speech was intended to demonstrate the deep and abiding respect the president has for these service members, to these ideals and the unique role our independent military plays in defending our democracy, no matter which party is in power," Jean-Pierre said.

AFP has fact-checked other claims about US politics here.