US Congressman Thomas Massie claims in a widely shared tweet that a series of photos shows Internal Revenue Service (IRS) recruits learning to use firearms and make arrests. This is misleading; the pictures show students with toy guns in mock IRS criminal investigations at a university in October 2017 and March 2022, and relatively few agents are authorized to carry guns.

“These are not auditions for the next Police Academy sequel," said Massie, a Republican from Kentucky, in an August 16, 2022 tweet with three photos that show people wearing police vests and holding what appear to be firearms. "This is an actual IRS recruiting program.”

Massie's post, which he also shared on Facebook, racked up tens of thousands of interactions as it spread among conservative figures such as former National Rifle Association spokesperson Dana Loesch, former One America News host Jack Posobiec and Daily Wire host Matt Walsh.

The tweet also circulated on Telegram and internet message boards affiliated with the QAnon conspiracy theory, as well as websites such as RedState and the Western Journal. 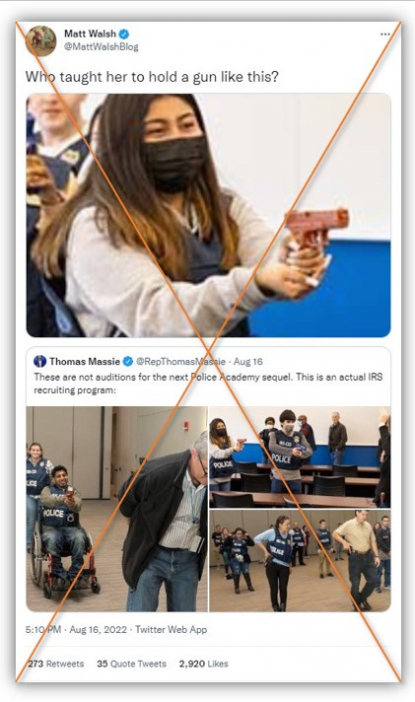 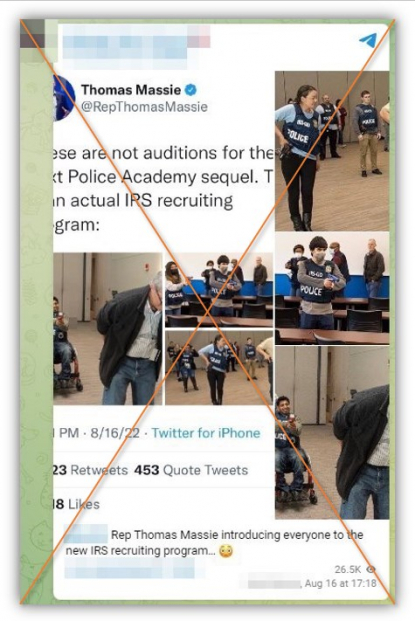 The posts come amid the spread of misinformation about the Inflation Reduction Act (IRA), a sweeping economic package that US President Joe Biden signed into law on August 16, 2022. AFP has previously fact-checked misleading claims that the IRA, whose spending is primarily offset by a minimum corporate tax, would create a new "army" of IRS agents targeting middle-class Americans.

"This is what Democrat priorities looks like," said Paris Dennard, a spokesperson for the Republican National Committee, in an August 16 tweet sharing the photos.

But the three images are not recent -- nor are they related to the latest legislation, as the posts suggest.

In tweets posted after this fact check was published, Massie acknowledged the apparent firearms in the photos were props. AFP reached out to Massie's office for additional comment.

Reverse image searches revealed the pictures shared online were posted by Stockton University, a public university in New Jersey, in October 2017 and March 2022.

Stacey Clapp, a spokesperson for Stockton University, confirmed to AFP that the photos in Massie's tweet "were taken by the university at separate educational workshops in 2017 and 2022" for students interested in learning about alternative careers in finance and accounting.

The workshops were part of an IRS program called the Adrian Project, which "allows students to become IRS Criminal Investigation special agents for a day." The day-long sessions simulate IRS criminal investigations and involve toy guns, according to the agency's website.

Khaalid Walls, a spokesman for the IRS Criminal Investigation division -- which oversees the Adrian Project -- told AFP that student participants in the simulations investigate mock financial crimes, with instruction from the division's special agents. He said the program, used by dozens of universities and high schools across the US, is meant to give students an overview of undercover work, surveillance, subpoenas and search warrants.

Walls also confirmed the photos in Massie's tweet were captured during workshops at Stockton University in 2017 and March 2022. A university video seen above also shows the training.

Not all IRS agents carry firearms

The IRA is unrelated to the Adrian Project, which has been around for nearly two decades.

The law allocates roughly $80 billion to revamp the IRS' technology and workforce. As AFP has previously reported, the legislation could allow for the expansion of the agency's roughly 78,000-strong workforce. 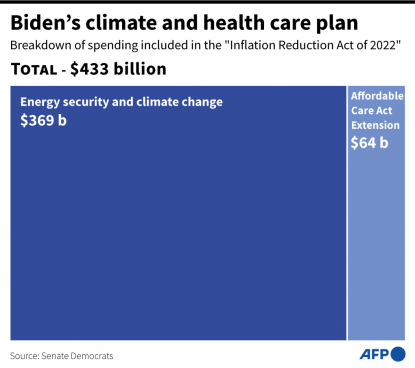 However, not all IRS employees receive firearm training, as the posts make it seem.

Fewer than half of IRS agents are involved in enforcement and collections. The agency's Criminal Investigation division has approximately 3,000 employees, and only about 2,100 of those workers are special agents authorized to carry firearms.

The IRS previously told AFP that many of the employees it hopes to hire over the next decade would replace more than 50,000 expected to leave or retire in the coming years.

AFP has fact-checked other misleading claims about the IRA here.