Skip to main content
US President Joe Biden waves while walking to Marine One on the South Lawn of the White House in Washington, DC, on August 7, 2022, as he travels to Rehoboth Beach, Delaware. ( AFP / Stefani Reynolds)

A screenshot that appears to show a Washington Post opinion piece calling on US President Joe Biden to cancel the midterm elections in November has been shared hundreds of times on social media. However, the newspaper did not publish such an article; the image has been altered to add a false headline.

"Cancel elections in case they lose? Said every dictator ever!" reads a Facebook post shared on August 1.

It appears to show a screenshot of an opinion piece by Washington Post columnist Jennifer Rubin headlined: "To save democracy, Biden must cancel the midterms".

The November midterms, which will decide which party controls Congress for the last two years of Biden's first term, is shaping up as rough for Democrats who even now only control the legislature by a few votes.

Blamed by voters for soaring inflation -- at a four-decade high -- and widespread pessimism in the messy aftermath of the Covid-19 pandemic, Democrats are forecast to lose at least the House of Representatives and maybe the Senate. 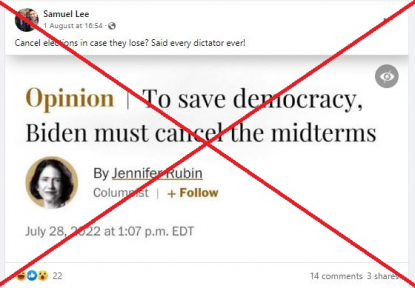 Some social media users appeared to believe the image showed a genuine article.

"Unreal. What publication is this?" one Twitter user commented.

"Lost for words, just when you think it can't get any worse," another wrote.

However, the screenshot has been altered from a different Washington Post article.

AFP found no article with the headline in the screenshot, including on Jennifer Rubin's author page on the Washington Post's website.

However, an article by Rubin with the headline "Recession or jobs boom? It's not so simple" has the same publication date and time as the doctored screenshot shared online -- July 28, 2022 at 1:07 pm EDT (Eastern Daylight Time).

A Washington Post representative told AFP on August 8 that the headline in the altered screenshot "was not something we published".