After a record hike in fuel prices in Bangladesh sparked protests around the country, a video was viewed thousands of times in Facebook posts that claimed it showed transport leaders beating up an energy ministry employee. However, the footage has circulated in news reports about a scuffle at a council meeting for a Hindu ceremony. AFP did not find any reports about an attack on an energy ministry employee.

The video, which shows a group of men punching another man, was viewed more than 9,000 times in a Facebook post shared on August 7.

The Bengali-language post says: "This time, the labour leaders beat up the secretary's PS (personal secretary) Jahangir in the energy secretary's office."

"After Jahangir repeatedly advocated for the government in the bus fare determination meeting, the transport worker leaders beat him up in front of the energy secretary."

Thousands of Bangladeshis besieged fuel stations after the government said on August 5 that the price of petrol was going up by as much as 52 per cent, the largest jump on record, on the back of higher oil prices.

Motorcycle riders raced to fuel stations nationwide to try and fill up before the price rise went into effect. Some stations paused sales, and sporadic protests broke out. 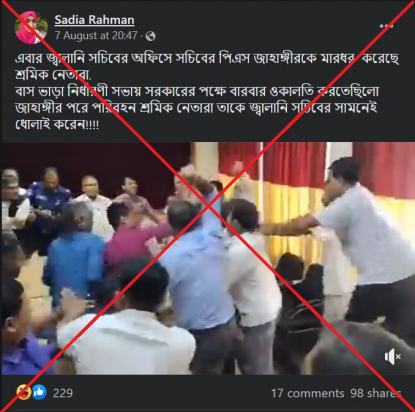 The same video was also shared in similar Facebook posts here and here.

However, the clip is in fact unrelated to the fuel protests.

A keyword search on Google found the video published in news reports about a scuffle between two rival groups during a council meeting for a Hindu ceremony in the central Bangladesh district of Faridpur.

Bangladeshi online news portal Jagonews24 posted the clip on August 7 in a Facebook post that said in Bengali: "Fight at the Puja celebration council meeting in Faridpur."

Bangladeshi broadcaster Channel 24 also posted the video on YouTube on the same day, with the title: "Furore and scuffle in Puja celebration council meeting in Faridpur."

Below is a screenshot of the video in one of the misleading posts (left) and the clip posted by Jagonews24 (right):

Local administrative chief in Faridpur S M Imam Razi Tulu, who chaired the meeting, said the footage was unrelated to the fuel protests.

"This video shows an unexpected event in our council meeting room," he told AFP.

"We often get confused as there are two committees for Hindu festival celebrations and hence we tried to sit with them to mitigate their issues. But they got involved in a fight in front of us."

Razi recognised himself in the video circulating online, stood among a crowd of people from the 30-second mark.

A search on the Bangladesh energy ministry's website found the name of the personal secretary of the agency's chief Md Mahbub Hossain is Kazi Shahjahan -- not Jahangir, as claimed in the false posts.

Shahjahan denied the claim in the posts.

He told AFP: "The office [shown in the video] is not also ours and we didn't have any meeting with transport worker leaders this week."

AFP did not find any reports about an attack on a Bangladesh energy ministry employee, as of August 14.