Social media posts share a purported headline from The Atlantic that touts "the quiet courage of Biden's negative growth economy." But the supposed article about the US president is fabricated; the magazine confirmed to AFP that it did not publish such a story.

"In an era of unchecked economic prosperity, one man had the moxie to pump the brakes -- to save us from ourselves," says the sub-headline in a screenshot shared July 29, 2022 on Twitter.

Dinesh D'Souza, a conservative commentator and frequent critic of Joe Biden, shared the post and wrote: "This is NOT a parody @TheAtlantic."

The tweet, which does not link to a full article, accumulated more than 1,400 shares and 5,600 likes. Other screenshots of the alleged Atlantic story circulated on Facebook and Instagram. 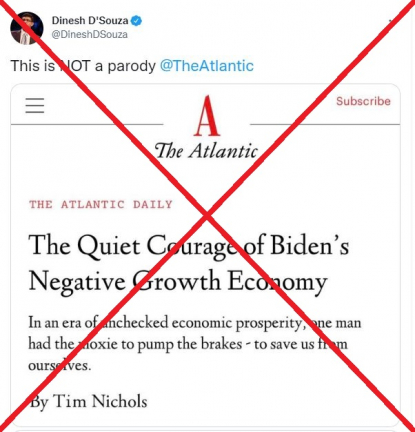 The posts coincide with heated political debate on whether the US economy has slipped into recession and whether such a downturn is needed to choke off a surge in inflation.

Some of those who commented online suggested the article was part of "propaganda" aiming to put a positive spin on negative economic news.

"Causing poverty is stunning and brave," said Matt Rinaldi, chairman of the Texas Republican Party, in a July 29 tweet with the screenshot.

But The Atlantic said no such article exists.

"This image is indeed fabricated, and is not an actual Atlantic article," said Anna Bross, the magazine's senior vice president for communications, in response to a query from AFP.

"And we do not have an author by the name of Tim Nichols. We have reported this as fake and as a trademark infringement."

The Atlantic does have a contributing writer named Tom Nichols, whose name is close to the one in the screenshot. But his author page has no article resembling the one shown in the posts.

Earlier this year, The Atlantic published an article highlighting the risks of a potential recession -- but it does not resemble the story shared online.

AFP has previously fact-checked fabricated images using logos from The Atlantic and other publications.