Photo of Indonesian religious affairs minister at Vatican taken in 2019, before he took office

As Indonesia Muslims prepared for the 2022 hajj, a picture was shared in multiple Facebook and Twitter posts that claim it shows the minister responsible for facilitating the annual pilgrimage instead visiting the Pope at the Vatican. However, the claim is false. While Yaqut Cholil Qoumas did visit the Vatican in June 2022, this photo was taken in September 2019, one year before he was appointed Indonesia's minister of religious affairs.

"Instead of going to Mecca to handle the hajj, he went to the Vatican. No surprise when you consider his policies that harm Muslims," reads the Indonesian-language caption to a picture shared on Facebook here on June 16, 2022. 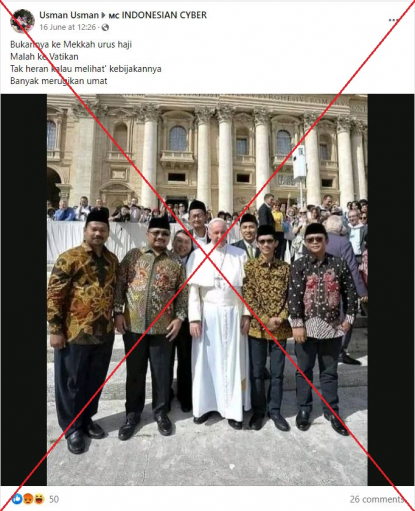 The minister is responsible for the administration of the hajj -- an annual pilgrimage to the holy city of Mecca in Saudi Arabia that must be undertaken by all Muslims who have the means at least once in their lives.

According to The Jakarta Post newspaper, he has faced resistance since assuming office in December 2020, with some groups pushing back against his more progressive policies.

An attempt to regulate the use of loudspeakers also saw Yaqut criticised -- and even accused of blasphemy -- after he compared the loud Islamic calls to prayer with the noise of barking dogs.

The picture circulated as the first batch of Indonesian pilgrims arrived in Saudi Arabia on June 4, 2022, ahead of the hajj in July.

The group were the first foreign pilgrims to arrive in the country since before the Covid-19 pandemic, which prompted authorities to sharply restrict the annual ritual.

Comments from users indicated that some believed the picture had been taken recently.

"He is indeed that kind of person," read one comment.

"Perhaps there will be hajj pilgrims in Vatican," another user wrote.

While Yaqut did meet Pope Francis in the Vatican on June 8, 2022, to invite the pontiff to visit Indonesia, the photo was taken before he had been sworn in as Indonesia's religious affairs minister.

A reverse image search and subsequent keyword searches on Google led to a picture published on the website of Photovat, or the Photo Service of the Holy See, on September 25, 2019.

The Sagrato refers to the churchyard of St Peter's Basilica in the Vatican.

Below is a screenshot comparison of the picture in the misleading post (left) and the photo on the Photovat website (right): 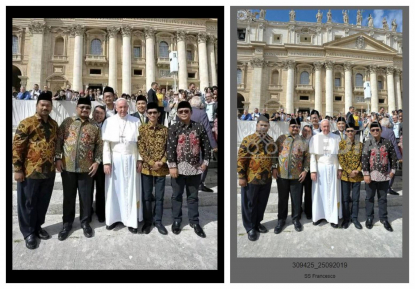 At the time, Yaqut was the chairman of Ansor, the youth wing of mass Islamic organisation Nadhlatul Ulama.

He met Pope Francis to discuss efforts to foster peace around the world.

The 2019 hajj season ended in mid-August.

According to Kompas.com and CNN Indonesia, Yaqut visited Mecca in mid-May 2022 to review the accommodation and services for Indonesian pilgrims and concluded that the facilities were up to standard.

Yaqut, seen as a figure who promotes religious tolerance, is a frequent target of misinformation -- some have been debunked by AFP here and here.