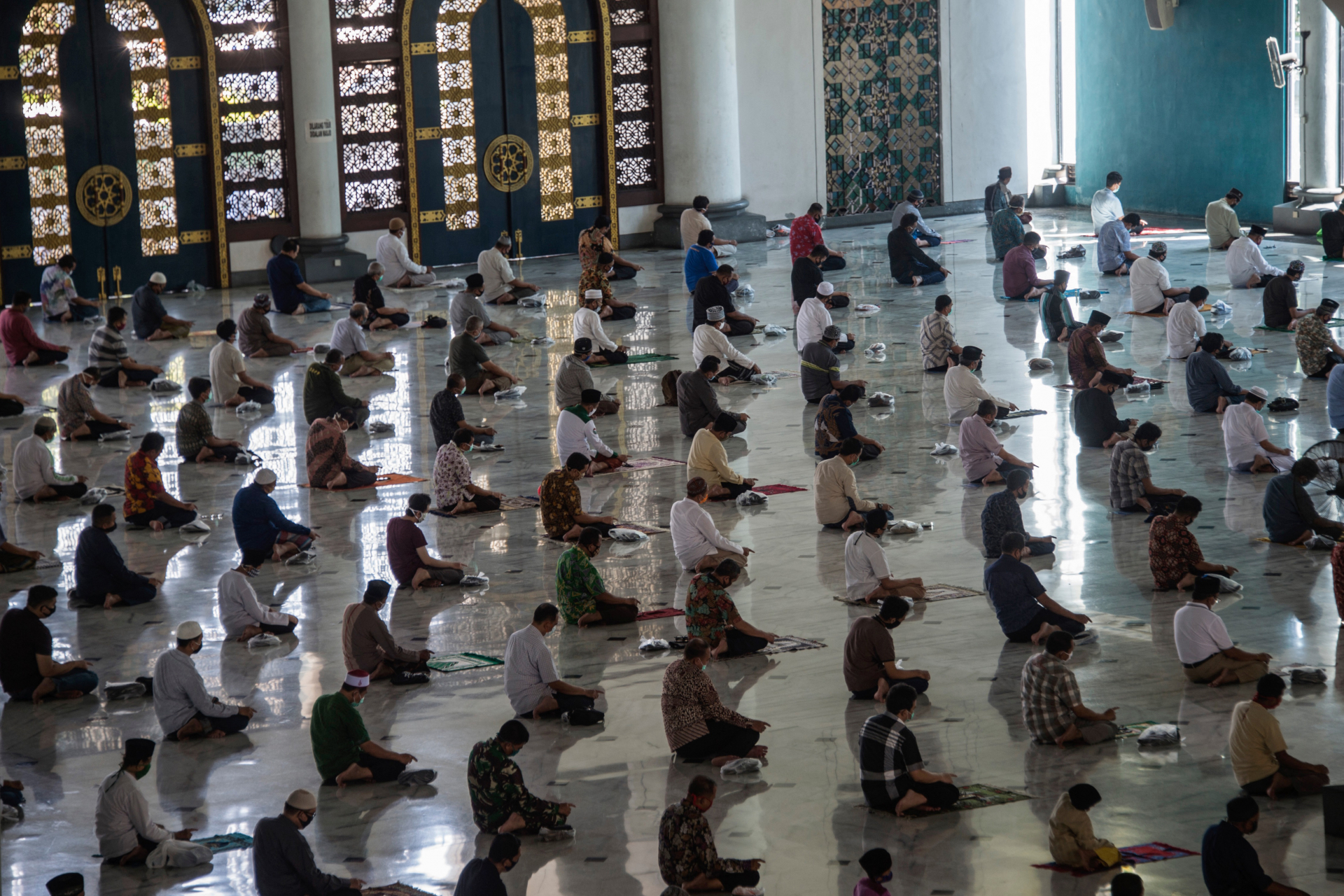 Muslims observe social distancing amid the COVID-19 pandemic as they offer congregational Friday prayers at a mosque in the Indonesian city of Surabaya on June 5, 2020. (AFP / Juni Kriswanto)

A video has been viewed tens of thousands of times on YouTube and Facebook alongside a claim that it shows Indonesia's Religious Affairs Minister banned communal Friday prayers. The claim is false, according to the Religious Affairs Ministry. The video shared on YouTube and Facebook in fact shows scenes at a mosque captured in March 2020, months before Yaqut was appointed as religious affairs minister. The letter shown in the video is a regional directive issued by an official in the Indonesian city of Kupang, not Yaqut.

Text superimposed on the thumbnail of the YouTube video says: “HEYY QUD YA’JUD YOU WANT TO OPPOSE GOD’S LAWS!! BARBARIC!! YOU EVEN BAN FRIDAY PRAYERS!!!” 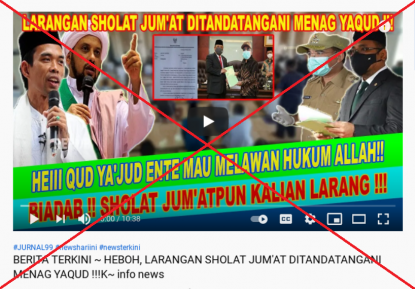 Ya’jud, or Yajuj is an Islamic term that refers to one of two hostile, corrupt forces that will ravage the Earth before the end of the world, according to Islamic eschatology.

The video begins with a scene showing some men arguing inside a mosque. At the end of the scene, a narrator can be heard saying: “Barbaric. You even prohibit Friday prayers. Yaqut, the religious affairs minister, has signed a decree banning Friday prayers.”

The video has been viewed more than 5,700 times after it was shared alongside a similar claim on Facebook here, here, here and here.

The Religious Affairs Ministry’s acting spokesman Yayat Supriyadi told AFP the claim was “a hoax” in a WhatsApp message on March 1, 2021.

A reverse image search of the video's keyframes obtained using digital verification tool InVID-WeVerify found the scene showing some men arguing in a mosque was taken from this YouTube video. It was published by Indonesian media Tribun Timur on March 20, 2020.

The Tribun Timur video is titled: “There Are No Friday Prayers, This Resident Protests Al-Markaz Mosque.”

The video caption's first two paragraphs read: “TRIBUN-TIMUR.COM, MAKASSAR - A number of people who want to take part in Friday prayers protested the caretakers of Al Markaz mosque because they suspended communal prayers on Friday, March 20, 2020, at 11am Indonesian Central Standard Time.

Two major mosques in Makassar, Al Markaz Al Islami mosque and the Grand Mosque, suspended communal Friday prayers from March 20, 2020, due to the Covid-19 pandemic. The move came in response to instructions from the South Sulawesi governor and recommendations of the Indonesian Ulema Council, Detik.com reported.

Yaqut was appointed and sworn in as religious affairs minister in December 2020, months after the suspension of communal Friday services at Al Markaz mosque.

The letter shown at the 33-second mark of the video was not issued by Yaqut and does not indicate there was a nationwide suspension order for Friday prayers, AFP has found.

The video actually shows a screenshot of a letter ordering the suspension of Friday prayers and other communal prayers in Kupang, the capital of East Nusa Tenggara province.

Kupang’s city government spokesperson Ernest Ludji told AFP by phone on February 24, 2021, that the letter was issued by the deputy mayor on February 8, 2021.