This image shows a 2012 protest against Guantanamo Bay detention camp

An image shared in multiple posts on Facebook and YouTube in February 2021 purports to show prisoners walking by the US Capitol. The posts were shared weeks after Trump supporters stormed the building in Washington DC. The image has been circulated in a misleading context: it shows an Amnesty International protest in 2012 that highlighted human rights abuses at the Guantanamo Bay detention camp. 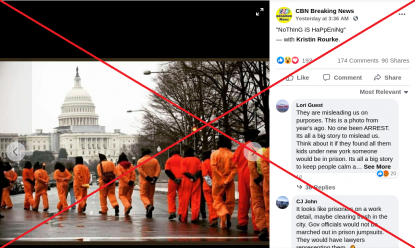 The image circulated online weeks after Trump supporters stormed the US Capitol on January 6, 2021 as lawmakers met to certify Joe Biden's victory in the November presidential election.

More than 150 people have been charged with federal crimes, including assaulting police officers and disrupting a federal proceeding, following the rampage, AFP reported here on January 27, 2021.

A reverse image search on Google found this article about a protest against human rights abuses at the Guantanamo Bay detention camp on a website for Amnesty International.

A screenshot of Amnesty International’s French website as of February 25, 2021.

The demonstration was held to mark the 10th anniversary of the establishment of the Guantanamo Bay detention camp on January 11, 2012, as noted in this Amnesty International press release.

This BBC News report published on January 12, 2012 about the same demonstration includes footage of the demonstrators wearing orange prisoner overalls as they walk along Constitution Avenue.

The location can be seen here on Google Maps.