A photo of thousands of people forming the lotus flag of India's ruling Bharatiya Janata Party (BJP) has been widely shared on Facebook and Twitter alongside a claim it shows supporters welcoming a minister visiting the southern state of Kerala in February 2021. The claim is false; the photo shows BJP fans forming the flag in 2015 to mark the party's 35th anniversary.

The photo was published on Facebook here on February 21, 2021.

The post’s caption, written in a mix of English and Hindi, reads: “Pic of the day. What an incredible scene. Lotus is blooming. #KeralaWelcomesYogiJi.”

Yogiji refers to Yogi Adityanath, a top BJP politician and chief minister of the state of Uttar Pradesh. 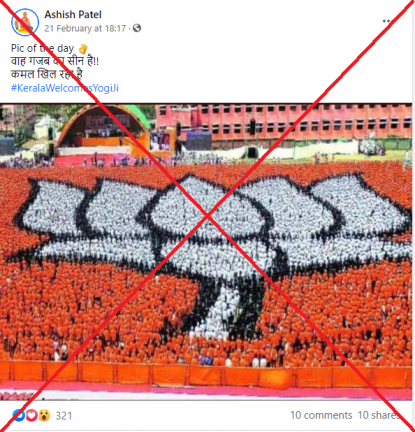 The post surfaced the same day that Adityanath visited the southern Indian state of Kerala. He tweeted about the visit and it was reported by media here and here.

A reverse image search on Google found that the photo featured in an article by The Indian Express on April 6, 2015. The image is credited to Indian Express journalist Bhupendra Rana.

Around 25,000 supports formed a human flag in Dahod, Gujara to celebrate the 35th anniversary of the BJP’s founding, the article reports. 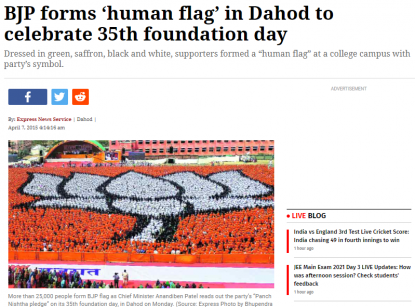 “Dressed in green, saffron, black and white, the supporters formed a ‘human flag’ over one lakh square foot area at a college campus with the party’s symbol - lotus - standing out in a sea of saffron and green,” the report reads.

Further keyword searches found that Quint, an Indian news and current affairs website, published footage of the human flag on YouTube on April 6, 2015.