This video shows computer generated imagery from a 2006 IMAX documentary

A YouTube video has been shared repeatedly in multiple posts on Facebook alongside a claim it shows NASA’s Perseverance Rover landing on Mars in February 2021. The claim is false: the video in fact shows computer generated imagery from “Roving Mars”, an IMAX documentary released in 2006. 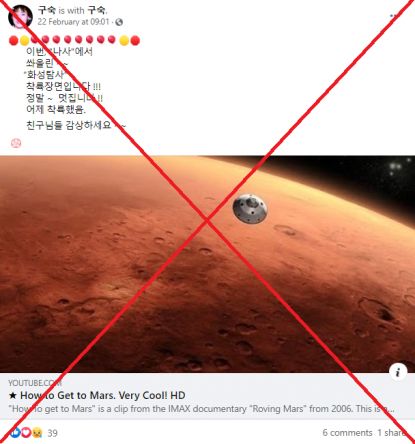 “This is the landing scene of ‘Perseverance Rover’ launched by NASA. What a great scene. It landed yesterday. Let’s enjoy together, friends,” reads the post’s Korean-language claim.

The video shared in the posts in fact shows computer generated imagery from “Roving Mars”, an IMAX documentary released in 2006.

The video’s description reads: “‘How To get to Mars’ is a clip from the IMAX documentary "Roving Mars" from 2006. This is an edited short version.

“A little CLARIFICATION is needed! This is ANIMATION ment [sic] to ILLUSTRATE how NASA landed the two robots Spirit and Opportunity on Mars back in 2003/04.”

“Roving Mars” is a 40-minute documentary that was released in January 2006. The film details the development and launch in 2003 of two NASA Mars rovers called Spirit and Opportunity, according to online database IMDb.

The film largely uses computer generated animation based on images and data from the rovers to tell the story of the mission, as The Boston Globe noted here on January 25, 2009. NASA details the journey of Spirit and Opportunity on its website here.

Below is a screenshot comparison of the YouTube video shared in the misleading posts (L) and the “Roving Mars” trailer published on IMDb (R):

The film's official trailer can be seen on YouTube below: