Skip to main content
Demonstrators deploy a Black Lives Matter banner near the White House during a demonstration against racism and police brutality, in Washington, DC on June 6, 2020 (AFP / Olivier Douliery)

Thousands of Facebook users shared a headline claiming that President Joe Biden “quietly” pardoned 2,617 Black Lives Matter protesters. This is false; the claim was originally published on a self-proclaimed satirical website, and the Office of the Pardon Attorney told AFP Biden has not yet granted clemency to anyone.

“Biden Quietly Pardons 2,617 BLM Protesters,” reads the headline of an article shared as a screenshot on Facebook on February 16, 2021. 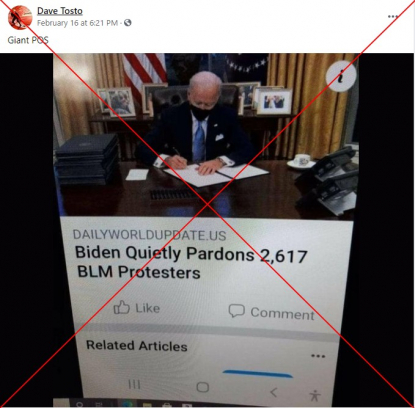 The original article was published January 21, 2021 on Daily World Update, a website that belongs to a wider network of satirical websites, America’s Last Line of Defense, run by former political blogger Christopher Blair.

Articles on Blair’s sites make outrageous claims written as fact, albeit with clear indications they are not real, but are still shared by people who apparently believe they are true in America’s partisan political environment.

This article bears the mention “Satire and/or Conservative Fan Fiction,” and Daily World Update writes on its “About” page that “Everything on this website is fiction.”

“Biden’s pardon includes ‘anyone arrested for protesting in a non-violent manner,’” the article says.

The US Department of Justice, which keeps records of presidential pardons online via the Office of the Pardon Attorney, shows that Biden had yet to grant a single pardon on February 26, 2021.

Nicole Navas Oxman, a spokeswoman for the Department of Justice, confirmed to AFP by email that “President Biden has not granted any pardons.”

Moreover, Biden is unlikely to have pardoned protesters of any sort, said Jenny Roberts, a professor and co-director of American University’s Criminal Justice Clinic. This is because, according to the US Constitution, “a President can only pardon federal and most DC offenses—not those charged in a state court,” she said by email.

The offenses often charged in the context of protests -- unlawful assembly, refusal to disperse, looting -- are usually not federal crimes.

The Office of the Pardon Attorney explicitly states on its clemency application webpage that “if you are seeking clemency for a state criminal conviction, you should not complete and submit this petition. Instead, you should contact the Governor or other appropriate authorities of the state where the conviction occurred.”

In the case of offenses committed in the District of Columbia, which is not a state, lower-level offenses could theoretically have been pardoned by the president. Roberts referred AFP to an analysis by the Restoration of Rights Project, an undertaking by various US legal associations which studies US laws and practices.

The DC pardon study points out that only one non-federal conviction in DC was pardoned since 1990, by Barack Obama in 2013.

An investigation by The Washington Post analyzed the cases of 2,652 people arrested at protests organized in the first two weeks following the death of George Floyd, a Black man from Minneapolis who died in police custody.

Of those, 2,059 were accused of nonviolent misdemeanors, most on charges of violating curfew or emergency orders.

The 2020 protests against police brutality and racism generated a wave of disinformation, with debunked claims about the Black Lives Matter movement found here.