Posts shared tens of thousands of times on social media claim to show photos of the Keystone oil pipeline and a lithium mine. However, the images are mislabeled; one shows an oil pipeline in Alaska while the other shows a gold mine.

"The top picture is part of the keystone pipeline The bottom is a lithium mine," says text in a June 15, 2022 Facebook post. "Those are the facts. Truth hurts doesn't it FB."

The top image shows what appears to be a metal pipeline running through a verdant forest. The bottom photo shows the parched, red terraces of a deep open-cast mine. 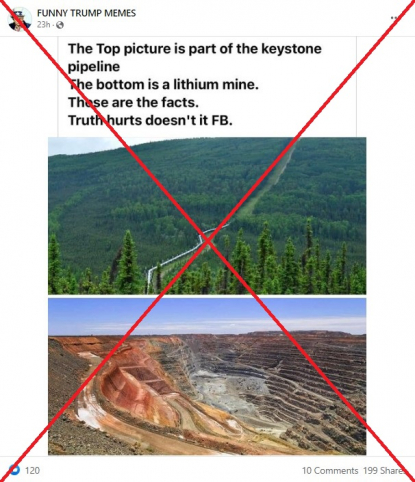 A reverse image search reveals the top picture was posted on Flickr, a photo-sharing site, in 2011. The account identifies the location as the Trans-Alaska Pipeline.

A search for the bottom image leads to the same photograph on Shutterstock, a commercial stock photo site. The location is identified as the Kalgoorlie gold mine in Western Australia.

The juxtaposition of the mislabeled images makes oil appear as a cleaner option than lithium -- a key element for batteries in electric-powered vehicles -- despite scientific evidence to the contrary.

Scientists have acknowledged the environmental and social costs if metals for batteries are not mined responsibly. The International Energy Agency (IEA) says these could include emissions, pollution and biodiversity loss and has detailed ways to reduce them. Petroleum production has its own environmental risks such as oil leaks and high carbon dioxide emissions for transport and other uses.

An expert for the International Council on Clean Transportation, Georg Bieker, noted in comments to AFP for a previous fact check that despite the negative impacts of mining, "saying that sticking to the fossil alternatives is better ... is certainly not correct."

US President Joe Biden in January 2021 ordered the Keystone XL project -- which would have expanded the existing pipeline -- to shut down as part of his program to shift the country away from fossil fuels, which help drive climate change. He also halted new oil and gas drilling on federal lands and offshore.

The 1,210-mile (1,950-kilometer) pipeline was intended to open in 2023 and transport up to 830,000 barrels of oil per day from the Alberta oil sands in Canada to Nebraska and Texas. The project was formally terminated in July 2021. 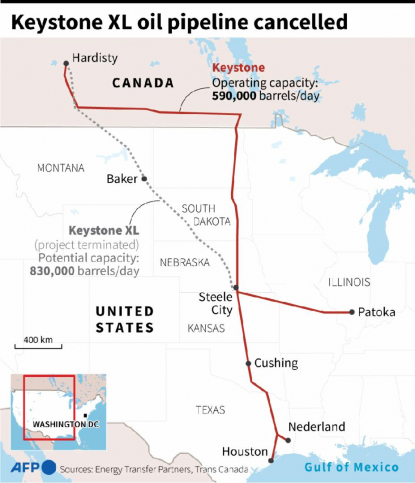 Map of the Keystone and Keystone XL oil pipelines in the US and Canada ( AFP / Paz PIZARRO, Laurence SAUBADU, STAFF)

Critics accused Biden of surrendering US "energy independence" and blamed his policies for surging gasoline and crude oil prices. AFP Fact Check addressed both of those claims here and here.

Biden's climate plan also includes a target for zero-emission cars to make up half of all automobiles sold in the US by 2030, heralding a shift to electric vehicles. Online, skeptics have warned of the potential environmental impact of mining minerals for car batteries. 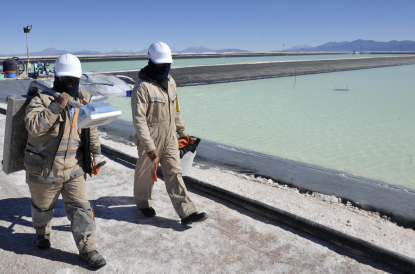 The IEA says Australia accounts for more than half of world's lithium production, while China does the most lithium processing.

According to some past estimates, at least half of the world's lithium has traditionally been extracted from brine. The IEA said in 2021 that production has been shifting from brine to rock-based extraction.

However, data from the US Geological Survey indicates that the biggest reserves of lithium are in Bolivia, Argentina and Chile, where it is principally extracted from brine -- not rock.

One estimate from the consulting firm McKinsey forecasts lithium demand will soar to 400 million metric tons by 2030. Increased demand could mean shifting to more rock extraction for lithium which would have a greater environment impact, the IEA says, highlighting a need for more sustainable practices.

AFP has fact-checked other claims about the climate here.

All articles
CLIMATE US POLITICS