Footage of Nigeria’s Vice President Yemi Osinbajo in a popcorn store has been circulating on social media with claims that he bought a box of the snack in response to the former governor of Borno state likening him to a popcorn seller. This is false: the footage was published by Osinbajo back in 2018 when he visited a cinema in the capital Abuja.

Popular Nigerian online news blogging platform GistReel.Com tweeted the footage and the claim on June 5, 2022. The platform was previously a subject of a debunk by AFP Fact Check about a clip purportedly showing a groom confronting his bride over infidelity. 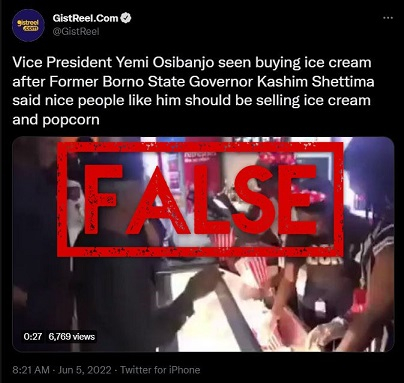 The clip has also been circulated on other social networks by accounts with a history of publishing questionable claims (here and here).

Osinbajo’s hopes of succeeding incumbent President Muhammadu Buhari next year were cut short after he lost the primary election for the ruling All Progressives Congress (APC) to the former governor of Lagos state, Bola Ahmed Tinubu.

Tinubu enjoyed the support of Shettima, who had described Osinbajo as a nice man in a television interview. Shettima added that such people who do not make good leaders should instead sell popcorn and ice cream.

Osinbajo is a good man. He is a nice man but nice men don't make good leaders. Nice men should be selling popcorn, and ice cream, says Senator Kassim Shettima.#CTVTweets#PoliticsTodaypic.twitter.com/vp9m2KKW0C

Shettima’s comments sparked outrage but he has since apologised, saying his remark was taken out of context.

But in reality, while the footage on social media indeed shows Osinbajo receiving popcorn, it has nothing to do with Shettima’s remark.

AFP Fact Check conducted reverse image searches on keyframes of the clip and found the video’s source on Twitter. It was published by Osinbajo himself on December 21, 2018, when he visited Genesis Cinema in Abuja to see a movie with a group of young people.

“This evening, I am at the Genesis Cinema hoping to watch Chief Daddy with a few young Nigerians,” he tweeted. “This should be interesting.”

This evening, I am at the Genesis Cinema hoping to watch Chief Daddy with a few young Nigerians.

This should be interesting. pic.twitter.com/oQFAKYLjtC

Tinubu will face former vice president Atiku Abubakar of the main opposition party and other candidates in a difficult battle to succeed Buhari as president next year.