Skip to main content
Gasoline and diesel fuel prices above $6 per gallon are displayed on a pump at a Chevron gas station at North Alameda and West Cesar Chavez Avenue near Union Station in downtown Los Angeles, California. ( AFP / Patrick Fallon)

Social media posts claim that American drivers consume at least 40 gallons of gasoline each week. This is misleading; estimates based on the best data available from government and private surveys indicate consumption is far lower than the figure cited.

The heavily shared claim does not specify whether the usage was per person, per household, or per vehicle.

Outlining the claim, one Facebook post from June 7, 2022, says: "If you make $15 an hour, you bring home on average, $9 per hour after taxes and insurance... Americans purchase 40 gallons of gas a week minimum. This means after you pay for gas each week, you bring home $4 an hour."

It goes on to say "you now make less money today than you did 2 years ago." It also names President Joe Biden and says of his supporters: "Your uneducated vote has lowered your household net income."

Similar messages were shared elsewhere on Facebook and Twitter to make a point about rising costs for Americans. 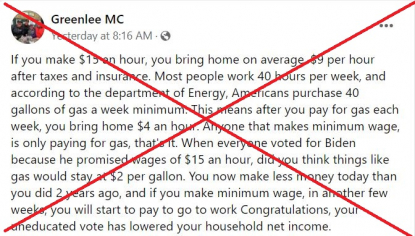 However, despite record-high gasoline prices in the US, the social media posts overstate usage and the resulting effect on household income.

Figures from the US Energy Information Administration (EIA) showed gasoline sales of 367 million gallons per day in 2019, the last full year before the pandemic, with a decline in 2020 and an uptick in 2021.

An EIA spokesperson told AFP that, based on a population of 206 million people aged 15-64, that equates to 1.8 gallons of gasoline per person per day, or 12.5 gallons per week.

An analysis by Michael Sivak of Sivak Applied Research for the website Green Car Congress found that, in 2020, per capita gasoline consumption in the US was 356 gallons per year, or about 6.8 gallons weekly. Sivak told AFP data from 2021 is not yet available.

A 2018 report from the non-profit American Automobile Association (AAA) found that, on average, US motorists drive 11,498 miles per year. Annual per-vehicle gasoline use totalled approximately 562 gallons, according to the report, which comes to about 10.8 gallons per week.

A spokesperson for AAA told AFP the gasoline consumption numbers had not been updated. But the latest data from the AAA Foundation for Traffic Safety found that, in 2019 and 2020, Americans drove 30 miles daily on average. That would be the equivalent of fewer than 11,000 miles per year.

Based on that estimate, Americans driving light-duty vehicles in 2020 -- for which the US Bureau of Transportation Statistics reported an average fuel economy of 22.9 miles per gallon -- would have consumed 478 gallons per year, or about nine gallons per week.

The social media posts come as high inflation impacts American households, with energy prices hard hit. A May 2022 report from the Conference Board, an economic research institute, found that inflation-adjusted incomes for Americans declined 3.5 percent in April 2022 from the previous year.

AFP has previously fact-checked misleading claims about the reasons behind the recent spike in energy costs.