Two images of a police officer were shared repeatedly in posts during this year's World Economic Forum (WEF) meeting in Davos that claim its "paramilitary force" was "detaining journalists at will" in the luxury Swiss resort. This is false. A WEF spokesperson told AFP that it does not have a paramilitary force or police force. The Graubunden canton police force, which is responsible for policing in Davos, said no arrests were made at the 2022 meeting. The posts shared photos of a Graubunden canton police officer wearing a WEF badge, which the force said was worn for "team spirit" during the Davos meeting.

"Breaking: The World Economic Forum has its own paramilitary force complete with @wef BADGES and armed military grade-weapons," reads the Facebook post published alongside two photos of a police officer on May 21, 2022.

"They are harassing and detaining journalists at will. By what authority do they operate?

"Who do (sic) commands them? Do Swiss authorities have a say?" 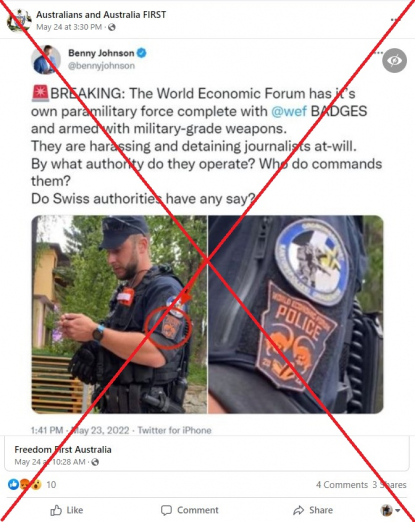 The posts circulated online as the WEF annual meeting was held in Davos from May 22 to 26.

The same images were shared alongside a similar claim by Facebook users here and here.

The claim was also shared here, here, and here on Twitter and Facebook in the United Kingdom, the United States, and Canada.

However, the claim is false, according to the WEF.

Security at the WEF's annual meeting is managed by Swiss authorities and the Graubunden canton police force, a WEF spokesperson told AFP.

"The Forum has no paramilitary force," a WEF spokesperson said. "It does not have any police force."

A spokesperson for the Graubunden canton police force told AFP that it is responsible for policing in Davos, and said that "no arrests were made" during this year's meeting.

"Before and during the annual meeting in Davos, security police checks on persons and vehicles are carried out by armed police forces from all over Switzerland.

"On behalf of the government of the Canton of Graubunden, the cantonal police ensure the safety of the population, WEF participants and guests in Davos," the spokesperson added.

The Swiss military also provides protection at WEF events under the command of the Graubunden canton police force.

In the first photo, the officer's badges can be seen more clearly.

The top badge represents the Graubunden security service, as shown in the screenshot comparison: 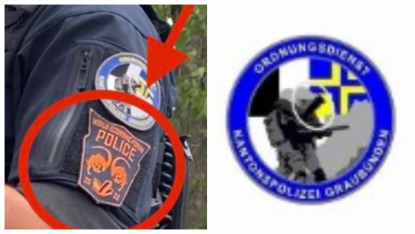 The WEF badges were created by the emergency services in 2006 with the heraldic animal of Graubunden -- a Capricorn -- and are redesigned every year by the region’s own emergency services, the police spokesperson added.

"This serves to build team spirit for the operation around the annual meeting," they said.

Embroidered badges are often created to mark certain occasions by the military or police force in a particular country.

AFP has previously debunked other false and misleading claims about the WEF here, here, and here.