Social media posts share screenshots of a purported World Economic Forum (WEF) tweet in which its founder and executive chairman Klaus Schwab says that eating meat and owning property are in direct conflict with moves to lower carbon emissions. But the message does not appear on the official Twitter account of the WEF, nor in a web archive search from the day it was supposedly published, and a spokeswoman said the organization did not send the tweet.

A March 31, 2022 Facebook post shared more than 1,000 times from a libertarian page in Canada includes a screenshot of what appears to be a tweet from the official account of the Swiss-based WEF in which Schwab is quoted as saying: "As humanity moves further toward a post-carbon future people must accept that things like eating meat and property ownership is simply unsustainable." 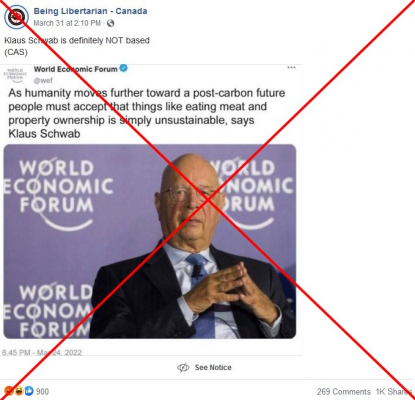 The foundation, best known for organizing an annual summit in Davos which attracts leading international economic and political figures to discuss policy ideas, has written about cutting meat consumption and replacing it with substitutes to reduce greenhouse gas emissions, and discussed issues related to sustainable cities and housing. It has tweeted about both themes.

But there is no public record of the purported tweet being sent from the WEF Twitter account, nor is it found by searching a web archive of the account from March 24, 2022 -- the date visible in the screenshot.

Alem Tedeneke, a WEF spokeswoman, said in an email that the apparent March 24, 2022 tweet was fabricated, and denied that Schwab used those terms.

"This tweet was never published by the World Economic Forum and Klaus Schwab never said this or something along those lines," she told AFP.

Visual indicators also point to the tweet being fake, including the time the message was sent represented with a period instead of a colon -- appearing as 6.45 -- and a lack of information about how the message was sent. In an authentic WEF tweet from March 24 pictured below, the time appears as 8:00, and it is clear that the tweet was sent via the service Buffer. 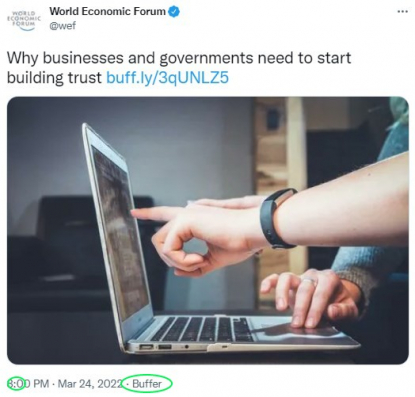 The WEF and Schwab are regular targets of disinformation, with the organization's "Great Reset" initiative at the center of a conspiracy theory falsely claiming the Covid-19 pandemic was orchestrated by global elites.