A photo of a child throwing a stone at a tank has been shared repeatedly in Chinese-language posts on Twitter, Facebook, and Weibo alongside a claim it shows the Ukrainian resistance against Russia's invasion. This is false: the photo was taken by an AFP journalist in 2002 and actually shows a Palestinian child throwing a stone at an Israeli tank.

"Even Ukrainian children are stubbornly resisting the tanks of the Russian invaders, are there any more reasons for us to not support Ukraine," reads the Chinese-language caption to the photo posted on Twitter on April 16, 2022.

It has been shared more than 140 times. 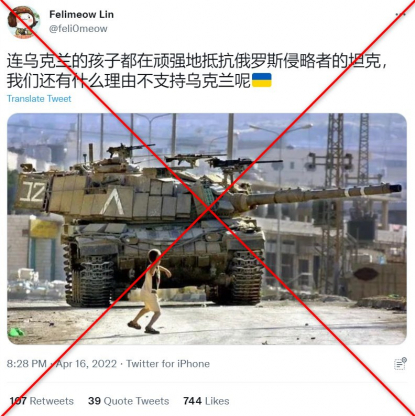 Russian President Vladimir Putin has said he launched the so-called military operation in Ukraine in February to save Russian speakers in the country from a "genocide" carried out by a "neo-Nazi" regime.

But his forces have faced allegations of war crimes -- most recently from German Chancellor Olaf Scholz, who said on April 19 that Putin was responsible for atrocities in Ukraine.

The claim is false: the photo -- captured by an AFP photographer -- shows a Palestinian child throwing a stone at an Israeli tank.

The photo can be seen here on AFP's website. 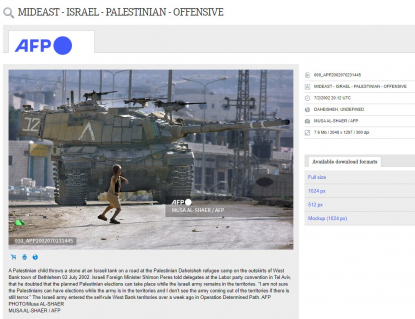 A screenshot, taken on April 19, 2022, of the original AFP photo on its website.

The photo's caption reads: "A Palestinian child throws a stone at an Israeli tank on a road at the Palestinian Dheisheh refugee camp on the outskirts of West Bank town of Bethlehem 02 July 2002.

"The Israeli army entered the self-rule West Bank territories over a week ago in Operation Determined Path."

Below is a screenshot comparison of the photo in the false post (left) and the AFP photo (right):

A screenshot comparison of the photo in the false post (left) and the AFP photo (right).

The photo was also published here with a credit to AFP on December 8, 2016 by Middle East Monitor, a UK-based not-for-profit press monitoring organisation.

A reverse search on TinEye found the same photo has been repeatedly shared online since at least 2008 -- more than a decade before Russia's invasion of Ukraine.