Online posts circulating in crisis-hit Sri Lanka have shared an image alongside a claim it shows the island nation's former energy minister gesturing admiringly at President Gotabaya Rajapaksa despite the latter sacking him in March 2022. The image has been shared in a misleading context: it had previously appeared in an August 2020 news report about the opening of Sri Lanka's parliament.

It shows former energy minister Udaya Gammanpila -- circled in red -- with his palms pressed together in an apparent gesture of admiration towards Rajapaksa who is shown arriving in parliament.

The post was published hours after Rajapaksa attended a parliament session for the first time since protests erupted over the country's worsening economic crisis. 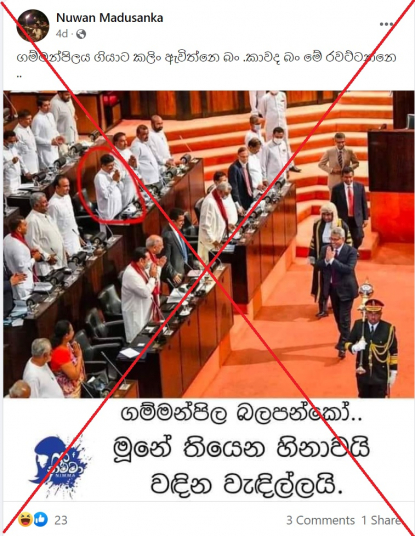 Sinhala-language text superimposed on the image translates as: "Look at Gammanpila's shrewd smile and the way he is begging."

The post's caption states: "Look, Gammanpila has returned even before the dust settled after he left [the government]. Who are they trying to fool?"

Rajapaksa had sacked Gammanpila in March after the then energy minister criticised the government's monetary policy, saying it had worsened the dollar shortage that has slammed oil imports.

The island nation has faced its most painful downturn in memory, with acute shortages, record inflation and lengthy electricity blackouts.

Dozens of lawmakers have turned against Rajapaksa and opposition parties have rebuffed invitations to join a unity government from the president, who insists he will remain in office to guide the island nation through the crisis.

The image was also shared alongside a similar claim on Facebook here, here and here.

Comments on the posts suggest social media users were misled and thought the image had been taken recently.

One wrote: "Great acting by Gammanpila in quitting the government, the drama however has obviously not lasted."

Another said: "Gammanpila and the other rogues are liars. Their quitting the government was a lie to distract the public. Now that he fooled the public, he is back with the government."

However, a reverse image search found the picture had been shared in a misleading context.

It was previously published here in the state-owned English-language newspaper Daily News on August 21, 2020, in a pictorial about the opening of Sri Lanka's ninth parliament.

The image in the misleading posts corresponds to the top-left photo in the Daily News report, and has the caption: "President Gotabaya Rajapaksa arrives in Parliament to deliver the Government's policy statement."

Below is a screenshot comparison of the image in the misleading posts (left) and the photo published by Daily News in 2020 (right).

A screenshot comparison of the image used in the misleading post (left) and the photo published in the Daily News in August 2020 (right).

AFP reviewed the live footage of the April 7 parliamentary session here and found it does not show the scene depicted in the misleading posts.

Rajapaksa can be seen arriving in the chamber at the 13-minute mark and taking a seat; however, the president is not accompanied by the speaker, as he was in 2020.

Responding to the posts, Gammanpila said on Twitter here on April 8: "Although social media claims that the above photo was taken on 07.04.2022, in fact, it was taken on 20.08.2020 when President visited Parliament for throne speech."