Two aerial photos of a crowded street have been shared hundreds of times on Facebook alongside a claim they show the new year water festival in coup-hit Myanmar's second city of Mandalay. The photos circulated online after Myanmar marked the normally boisterous event with silence and boycotts, as fighting between the military and opponents of the coup raged across the country. In fact, the photos show people in Mandalay celebrating the festival in 2017, not 2022.

The photos of crowded streets outside the Mandalay Palace were shared on Facebook on April 14, 2022.

The post's Burmese-language caption translates to English as: "Take a look. The second day of Thingyan in Mandalay. 14-April-2022." 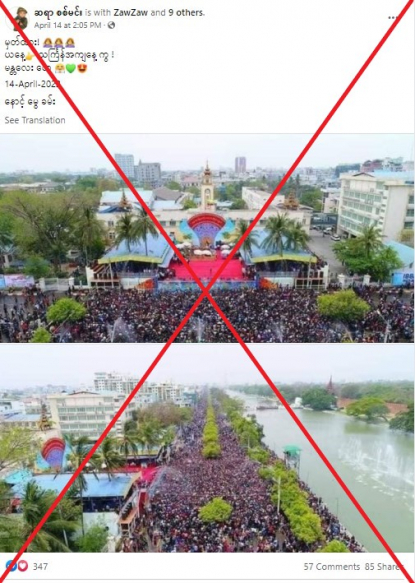 It has been shared more than 80 times.

The Thingyan water festival -- part of a cleansing ritual to welcome in the Buddhist new year -- is typically marked by jubilant pandemonium as crowds engage in large-scale street water fights.

However, the event was a subdued affair in 2022 after the junta's opponents called for people to boycott it as fighting between the military and opponents of the coup was reported across Myanmar, according to AFP.

The photos were shared alongside a similar claim that they show the festival in 2022 on Facebook here, here, here, and here.

This is false. A keyword search on Google found the images actually date back to 2017.

Below is a screenshot comparison of the photos in the misleading post (left) and the photos on the Mandalay City Development Committee page (right): 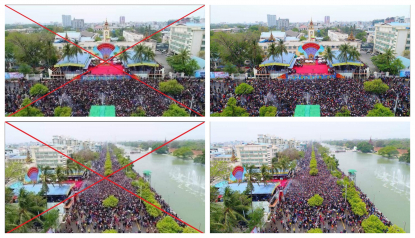 The Irrawaddy News published a photo essay in 2017 which featured a similar photo of Thingyan festival in Mandalay that year.

The photo caption reads: "The opening ceremony of 1379 Maha Thingyan festival in Mandalay which commenced on April 13, 2017."

The location of the photo can be seen here on Google Maps.

The Mandalay City Development Committee posted a video from the 2022 Thingyan festival here on April 16, 2022.

It shows a different scene from the images in the misleading post, with a notably smaller crowd filmed at the 2022 event compared to the 2017 festival.

Below is a screenshot comparison of one image from the 2017 festival (left) and the video of the 2022 event (right):