The video clip shows a skit performance, not a real couple fighting on their wedding day

A video showing members of a wedding party arguing in the street has circulated in numerous social media posts. The footage purportedly shows a groom confronting his bride for cheating on him with one of the groomsmen. This is false; the footage is actually a scene from a skit written and directed by a comedian.

“Man finds out on his wedding that his friend and wife-to-be are having an affair,” reads the caption on the post, which has racked up nearly 2,000 shares since being published on May 2, 2021.

The purported groom explains in the clip that one of the groomsmen had an affair with his wife. “This guy I call my friend… [points at the groomsman] you think I don’t know both of you are having an affair?” he said in Yoruba language and pidgin English.

The one-minute footage also appeared elsewhere on Facebook  alongside the same claim as well as on Instagram.

However, the video clip was shared out of context. It originated on a comedian's social media accounts, and he has since admitted it was staged to "make people learn" about the consequences of infidelity.

Multiple keyword searches by AFP Fact Check led to the same video on this Instagram page. The post does not mention what the footage actually shows but provides a clue to its source – in the top left-hand corner, a TikTok account called “@callmesegzy” flashes up on the screen. A search for the account on the social network revealed a higher quality version of the video from May 1, 2021.

“Girls why are you always do this (sic),” reads the post’s caption.

AFP Fact Check’s search for the same handle on Instagram and Facebook established that the video was actually a short play arranged by the account holder known as @callmesegzy, who describes himself as “an actor and skit maker” on YouTube, where further examples of his work can be seen.

AFP Fact Check has contacted the man behind the dramas, whose original name is  Olarinoye Sodiq and will update this report in the event we receive a response.

Meanwhile, Sodiq acknowledged on TikTok that for his bridal skit, he acted out scenes from a dysfunctional relationship in public for people to learn about the consequences of infidelity. 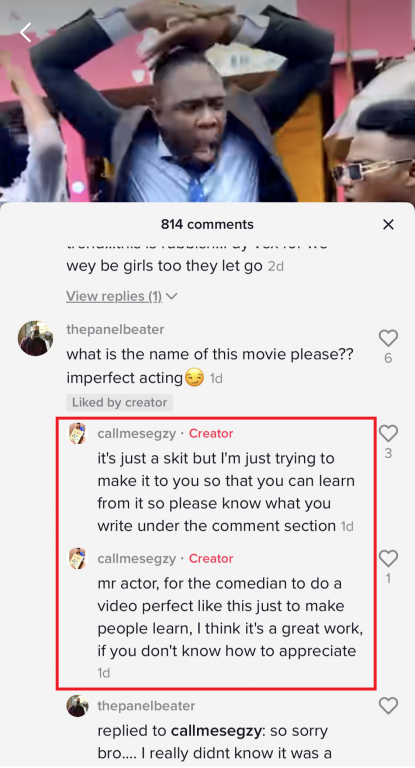 “It’s just a skit but I’m just trying to make it to you so that you can learn from it... (sic),” reads his response on TikTok to a comment on the video. “...for the comedian to do a video perfect like this just to make people learn, I think it’s a great work (sic)”.

In one of Sodiq’s recent posts on Instagram, the comedian is seen in photos with the same “wedding” outfit alongside other actors who featured in the performance. 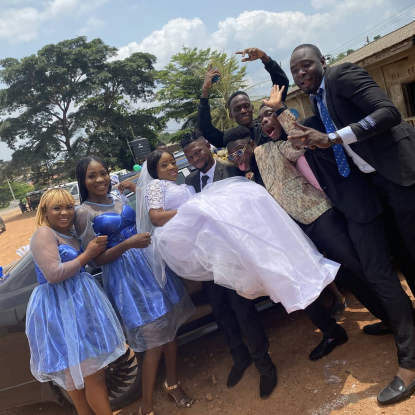 An image showing the actors of the viral play (Photo credit: @callmesegzy)

Also, longer versions of the drama were subsequently uploaded on social media, including on TikTok and Instagram.

Skit production is common in Nigeria, and these performances are regularly taken out of context. Last February, AFP Fact Check debunked a similar “marital meltdown” clip that actually shows a play performed by a church group to raise awareness about their Valentine’s Day programme.